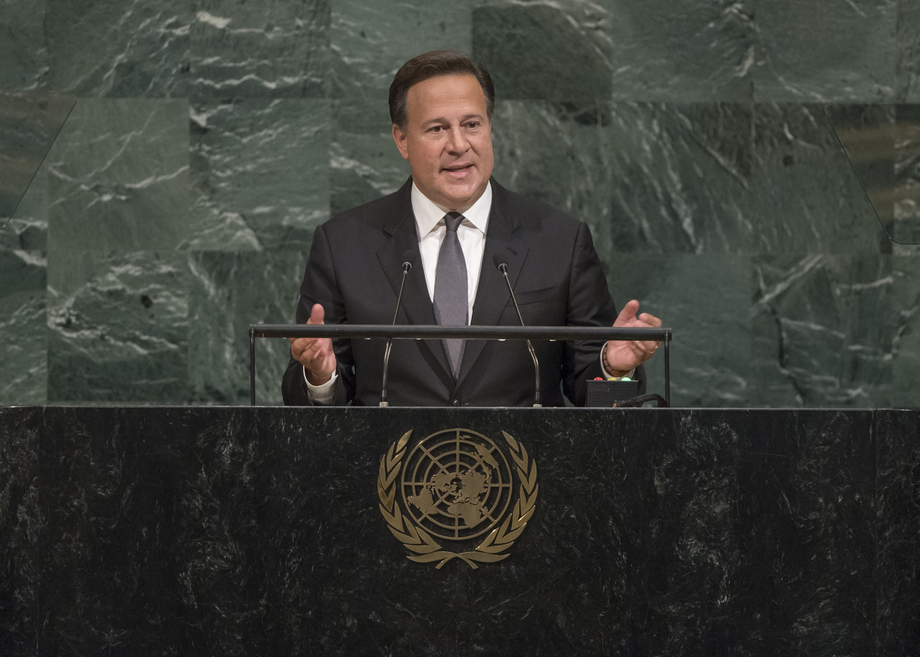 JUAN CARLOS VARELA RODRÍGUEZ, President of Panama, expressed condolences to Cuba, Mexico, United States and Caribbean nations suffering the effects of recent natural disasters.  Noting that those events signalled the need for solidarity, he said the world stood at a juncture marked by terrorism, organized crime and the increase in forced migration caused by war, poverty and inequality.  “Peace is a human construct” and the fruit of negotiations, he said, adding that the most appropriate way to confront the world’s challenges was by placing the human being at the heart of all decision-making.  That had been the strategy of his own administration, he said, adding that democracy was more than just the simple exercise of casting a ballot.  Indeed, elected leaders must understand that they bore responsibilities to their people.

Recalling the historic rapprochement between Cuba and the United States during a summit held in Panama in 2015, he said countries of the Americas must pursue the path of peace.  Welcoming progress in Colombia in that regard, he called on that country to consolidate its national peace process.  The region faced the threat of drug trafficking, he said, warning that “we cannot stand idly by” and allow that phenomenon to condemn people to poverty and challenge the authority of Governments.  Stressing that Panama would not relent in that fight, he appealed to production and consumer countries to “come to our aid” and help eliminate the “blood money” that drove the phenomenon.  Turning to Venezuela, he said it would be a serious miscalculation for that country’s Government to try to impose a single-party political model.  Among other things, such an action would increase outward migration.  Amid such challenges, he vowed to remain “on the front line” of efforts to strengthen unity among countries of the Americas and called on Panama’s neighbours to do to the same.

“We do not have time and space to waste in squabbling amongst ourselves,” he said as he turned to global challenges.  Condemning all acts of terrorism, he called on the Security Council to strengthen measures to foster lasting peace in such places as Syria and Iraq, and condemned the irresponsible leadership of such Governments as that in the Democratic People’s Republic of Korea, which sought to destabilize regions.  He also voiced support for the Secretary-General’s reform efforts to create a United Nations that would more nimbly respond to the world’s peoples.  Such reforms must centre around enhancing connections between nations, he said, stressing that multilateral cooperation was critical.  Middle-income countries such as Panama were well placed to transfer technology to developing nations, he said, adding that Panama had been central to regional responses to recent natural disasters.

Among his national goals, he underscored the need to ensure that politics was seen as service.  Panama was working to recuperate hundreds of millions of previously misappropriated dollars, and to reform corrupt systems.  As a result, it had improved living standards without increasing a single tax.  It was also making progress towards achieving the Sustainable Development Goals and was bound by a sense of fairness and equality.  Governments were obliged to root out tax evasion, which fostered chasms of inequality, he said, calling on them to distribute wealth in a manner that supported the poorest and most vulnerable.  The fight against corruption should not be measured by the number of people prosecuted by the judicial system, but rather, by the lives that were improved.  “This planet has enough wealth for all of humankind to be able to live decently,” he concluded.