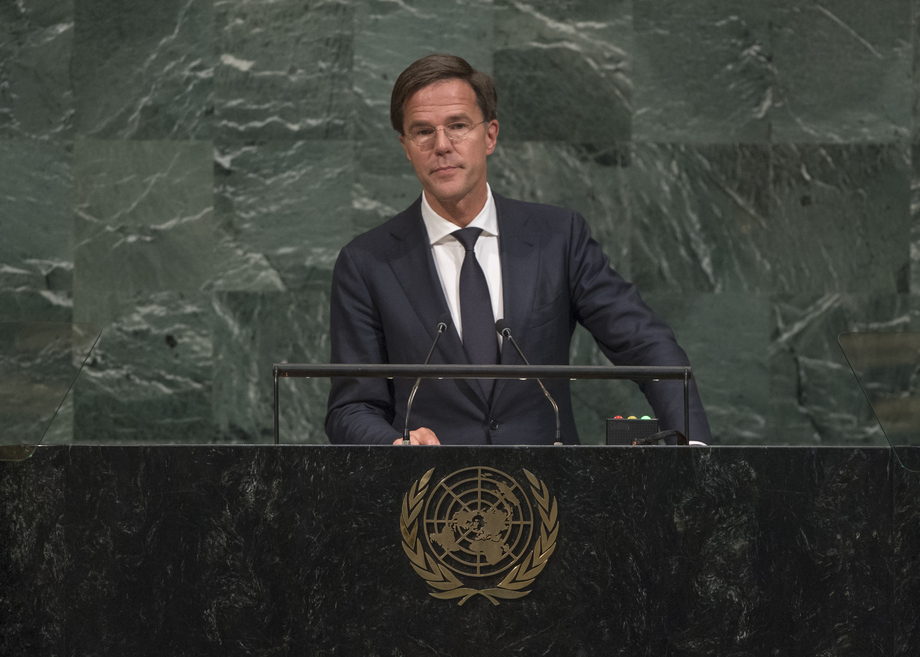 MARK RUTTE, Prime Minister of the Netherlands, said recent years had been marked by terrorist attacks, destructive floods, conflict and suffering in Myanmar, Syria, Central African Republic and Yemen.  More people were fleeing their homes due to violence, poverty, and nuclear issues were once again a major concern.  Nevertheless, the United Nations offered proof that progress was possible.  “Here, in this inviolable zone, thousands of people from every continent work together to foster peace, justice and development, in a world governed by international law,” he said.  “Sometimes it is three steps forward and two steps back, but if you take the long view, you can see clear progress.”

Outlining progress over the decades, he said extreme poverty and maternal mortality had been halved, child mortality nearly halved, and 90 per cent of children in developing countries now received a primary education.  The United Nations had played a crucial role in those achievements, and faith in the Organization remained strong among the world’s citizens.  “We must not let them down,” he stressed.  The Netherlands and its Kingdom partners, Curaçao, Aruba and St. Maarten, attached great importance to the United Nations and could not exist without both strong multilateral institutions and an effective international legal order.  Stressing that justice must be done for those who had perished on flight MH17 in 2014, he said the next step — the prosecution and trial of those responsible — had been agreed and would take place in the Netherlands.

The problems of climate change, migration, food security, terrorism and cybercrime were international in nature, he said, stressing that “no single country can tackle them in isolation”.  Instead of becoming more inward-looking, nations should take a step outwards.  Beginning in January 2018, the Netherlands would take its seat on the Security Council, having shared its term with Italy.  “This shared arrangement is a good example of European partnership,” he said, calling for more such cooperation.  On the Council, the Netherlands would pursue the priorities of a strong United Nations in a secure and sustainable world, working in a transparent way to achieve them.

Expressing support for United Nations reform, he called on all Member States to work towards a more effective and efficient Organization with better cooperation between its various agencies.  On the issue of security, he said the key word was “prevention”, which deserved more attention at the early stages of conflict.  That was already happening in the United Nations Multidimensional Integrated Stabilization Mission in Mali (MINUSMA), in which the Netherlands participated, where intelligence was being used to carry out long-range reconnaissance missions.  “This way we can anticipate conflict, instead of waiting for it to come our way,” he said, adding that MINUSMA could be a model for future missions.

Turning to counter-terrorism, he said the United Nations was the prime forum for global norm-setting and international cooperation on that issue.  Such challenges tied in with the Netherland’s priority focus on sustainability.  The 17 Sustainable Development Goals preceded all other issues as the “ultimate prevention agenda”, addressing the causes of instability and conflict.  Investing in human dignity, poverty eradication, climate resilience and economic and social progress would reduce the incidence of conflict.  “This Hall, this building, all of you, represent one of the greatest achievements of mankind,” he said, noting that the United Nations bore a heavy responsibility in today’s turbulent times.  “The United Nations needs to prove its worth more than ever.”