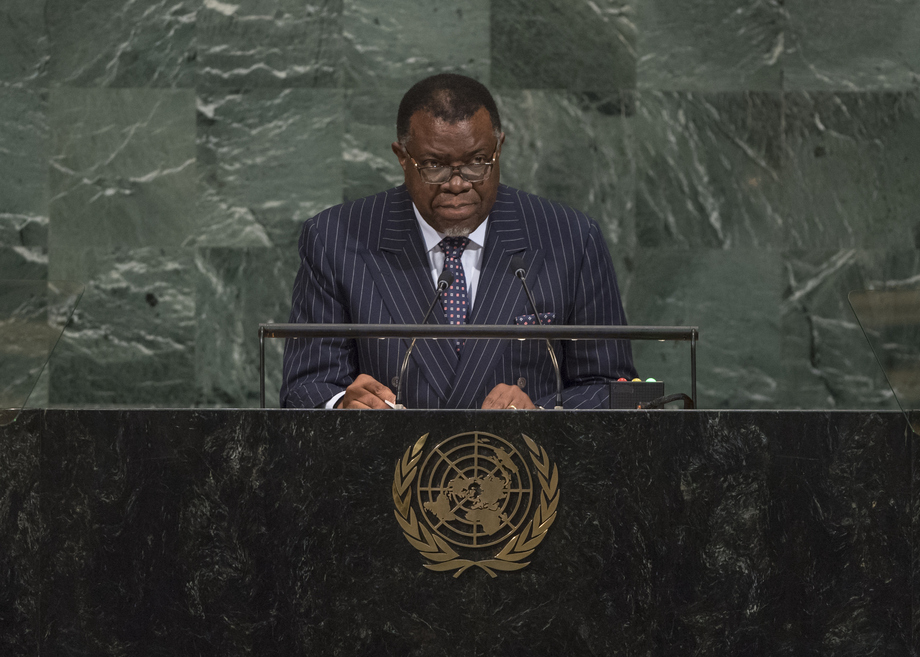 HAGE G. GEINGOB, President of Namibia, said that as long as poverty afflicted his country, there would never be lasting peace or social justice.  Growing income disparity posed global threats and only people-driven development would generate lasting change.  Namibia based its policies on the belief that “no Namibian should feel left out” because inclusivity would lead to harmony.  Social safety nets had contributed to a 52 per cent decline in poverty between 1993 and 2015, he said.

While much work remained to be done in efforts to reduce income inequality, Namibia was positioned to move forward with younger political leaders as the “older guard” made way for the “new breed,” he said, emphasizing that people-centred development must consider all members of society.  Namibia had introduced legislation to improve the representation of women, who now accounted for 48 per cent of the National Assembly.  The country also recognized the role of women in promoting global peace in negotiations and peacekeeping missions.

With 26 of the 52 United Nations peacekeeping operations and special political missions deployed in Africa, Namibia recognized the institutional partnership between the Security Council and the African Union, he said.  Calling for Africa to be viewed as an equal partner, he urged other nations to better embrace multilateralism.  Africa should be included at “the highest decision-making level” within the United Nations, he said, pointing out that a more inclusive Security Council would restore faith in the Organization.

Describing unity as the only path to a sustainable planet, he stressed that the people of Namibia would do anything to support the work of the Secretary‑General.  The country had reaffirmed the centrality of multilateralism in adopting the 2030 Agenda and the Paris Agreement, he said, adding that it had also reaffirmed the reality of climate change.  The natural hazards that had afflicted Sierra Leone, the Caribbean and the United States demonstrated the real threat of climate change, he said.

Turning to the Middle East, he said Namibia stood with the international consensus that Israel’s occupation of Palestine must end, reiterating its position that statehood and independence were “the national, inalienable and legal rights” of the Palestinian people.  He also expressed his country’s “unequivocal support” for the people of Western Sahara and their right to self-determination.  Namibia called for the implementation of Security Council and General Assembly resolutions and for holding the referendum in that territory.  He also voiced support for the lifting of all sanctions against Cuba.