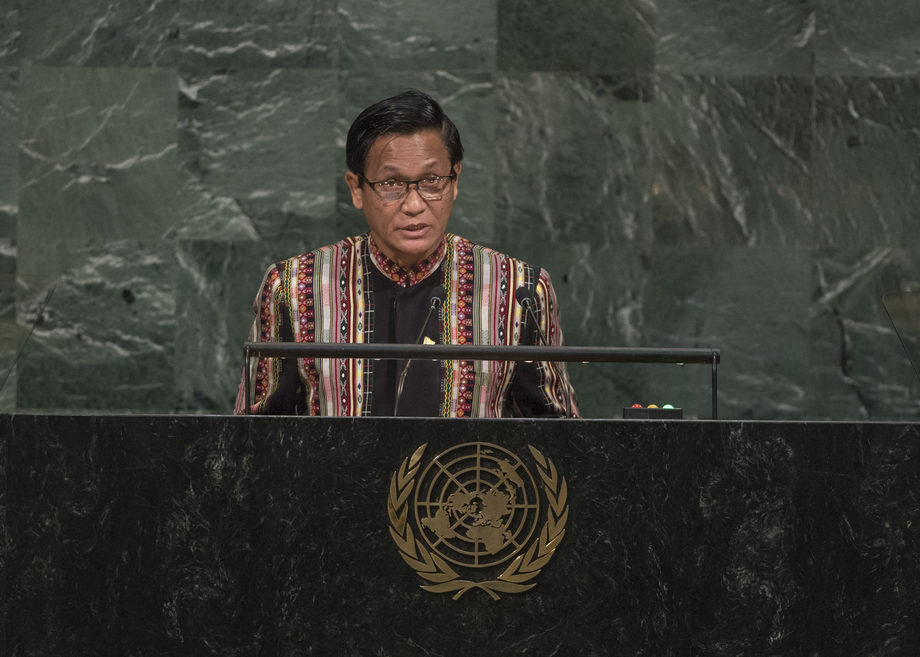 U HENRY VAN THIO, Vice-President of Myanmar, cited a briefing given to diplomats yesterday by State Counsellor Daw Aung San Suu Kyi, saying the situation in Rakhine was a top priority for the Government, which had been striving to ensure development, peace, stability and societal cohesion in that state.  That was no easy task, given decades of deep mistrust that needed to be slowly chiselled away.  He said that, following the 24 August release of the final report of the Advisory Commission on Rakhine State, chaired by Kofi Annan, he had hoped to tell the world today about progress made in implementation of its recommendations.  It was therefore with deep regret that he would address the Assembly on the current state of affairs following attacks last month by the terrorist group known as ARSA (Arakan Rohingya Salvation Army).

He went on to recall that, within hours of the release of the Advisory Commission’s report, a series of coordinated attacks had been carried out against 30 police stations in northern Rakhine, for which ARSA had claimed responsibility.  Those attacks had ignited fresh violence in the region as well as significant loss of life, widespread suffering and mass displacement.  Many had been forced to abandon their homes, including not only Muslims and Rakhine, but also Daingnet, Mro, Thet, Mramagyi and Hindu people.  “Let me be clear,” he emphasized,  “the Government of Myanmar is deeply concerned about the present situation in Rakhine.”  There was no denying the significant magnitude of the problem, although the situation had improved, with no armed clashes reported since 5 September, he said.

Myanmar was concerned about reports that large numbers of Muslims continued to cross into Bangladesh unabated, he said.  The reason for that exodus must be determined, he said.  However, the decision by a “great majority” of Muslims to remain in their villages was not well-known.  He nevertheless acknowledged the need for humanitarian assistance and for the Government to respond to the challenges in Rakhine State.  “The situation in Rakhine is complex,” he said.  “The challenges we face are significant.”

He went on to announce the launch of a committee chaired by the Union Minister for Social Welfare, Relief and Resettlement to oversee implementation of the Advisory Commission’s recommendations.  In order to ensure transparency and accountability, the committee would issue a progress report every four months, he said, adding that an advisory board comprising eminent persons from Myanmar and abroad would also be established.  At present, humanitarian assistance was the first priority, he said, emphasizing the Government’s commitment to ensuring that aid would be delivered without discrimination to all those in need.  Significant national funds and other resources had already been dedicated to humanitarian relief operations, he added, expressing gratitude to those countries that had made generous offers of support.

Myanmar was working hard to enhance relations with Bangladesh, he said, adding that it would welcome that country’s Home Minister at any time to discuss cooperation on border security.  With regard to the repatriation of those who had fled northern Rakhine for Bangladesh, he quoted the State Counsellor as having said that Myanmar was ready to start the verification process at any time, based on the experience of 1993.  Myanmar stood with the rest of the world in condemning terrorism, but would not allow terrorism to distract it from pursuing a long-term strategy to address the complex challenges in Rakhine, he said.  Recent events there were a painful reminder of the difficult challenges the country faced on its long journey towards peace, prosperity and democracy.  With Myanmar at a critical juncture in its history, it asked for the international community to continue its support, he said.

The representative of Myanmar, speaking in exercise of the right of reply, condemned “irresponsible remarks” made by Member States regarding the situation in Rakhine State.  Accusations of ethnic cleansing “must not be used lightly”.  The exodus from Rakhine State, not just affecting Muslims, could largely be attributed to “scorched earth” strategies employed by terrorist groups in the region.  He assured the Government was working to restore normalcy, prioritizing humanitarian assistance.  Myanmar was fully committed to resolving the situation and implementing recommendations by the Advisory Commission on Rakhine State.