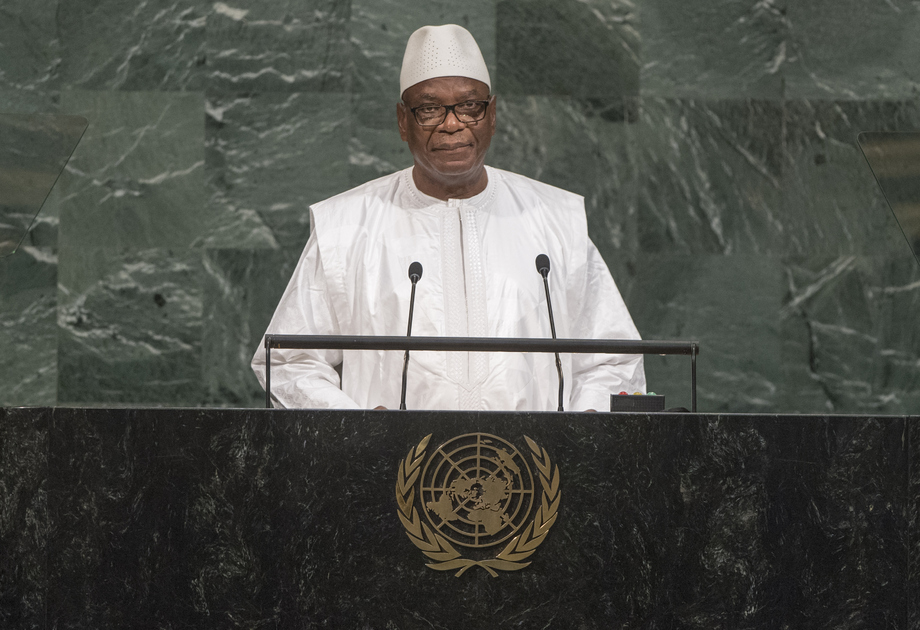 IBRAHIM BOUBACAR KEITA, President of Mali, said the session’s theme was both relevant and topical in a world facing multiple threats to peace, security and efforts to improve people’s living conditions.  The preservation of the planet was also urgent and in the interest of future generations, he said, adding that his country was working to improve its own conditions.  Since taking office, he had worked to bring an end to the Malian crisis, embarking on eight months of negotiations in Algiers.  The resulting Agreement on Peace and Reconciliation in Mali was aimed at restoring trust between the parties, he said, pointing out that the situation in the country had improved significantly.  The interim authorities and transitional colleges were now operational in Mali’s northern region, and the Administration was taking control in Kidal.

The United Nations Multidimensional Integrated Stabilization Mission in Mali (MINUSMA), along with national authorities, was now working to stabilize a “new front” in the centre of the country, he said.  Paying tribute to the troops that had paid the highest price during the conflict, he also thanked the Council for its adoption of resolution 2364 (2017) renewing the Mission’s mandate, and resolution 2374 (2017) setting up the legal framework for the sanctions regime on those responsible for obstructing the implementation of the peace agreement.  Noting that the worsening of the country’s security situation had negatively impacted the agreement’s implementation, he said it also posed a threat to global security, as it was marked by the trafficking of drugs, persons and arms, as well as terrorism.  “They are claiming lives in the course of criminal and asymmetric attacks,” he said, adding that no country could tackle such cross-border threats alone.

Noting that such challenges had led to the establishment of the “Group of 5 for the Sahel” (Sahel G-5) — namely, Mali, Mauritania, Burkina Faso, Niger and Chad — he said the Group had set up a joint force to fight against transnational organized crime, trafficking and related issues.  He wished that the Council’s resolutions had been undertaken under Chapter VII of the Charter, which would have allowed for the financing of that force.  “We are working relentlessly to make this force effective and operational,” he said, expressing hope that further operations would begin in October 2018.  Inviting all Member States to attend the upcoming financing conference, he said “the battle we are carrying out in the Sahel must be maintained” and warned that its failure would pose a threat to the world.  Pointing out that the Sahel G-5 also placed a high priority on implementing the Sustainable Development Goals, he called on the international community to support its Priority Investment Programme, including by attending an “Invest in Mali” conference in Bamako in December.

As an agricultural country, Mali was also concerned about the effects of climate change and was committed to the implementation of the Paris Agreement, he continued.  Among other challenges, he pointed out that the world also continued to face public health threats, including pandemics such as HIV/AIDS, tuberculosis and malaria, which must be addressed, and expressed support for the proposed adoption of a global compact on migration in 2018.  The realities and requirements of today’s world required the long-awaited reform of the Security Council, he added, reaffirming Mali’s commitment to the common African position on that issue.  Finally, he voiced concern about efforts to reduce peacekeeping budgets at the United Nations at a time when they were needed more than ever.