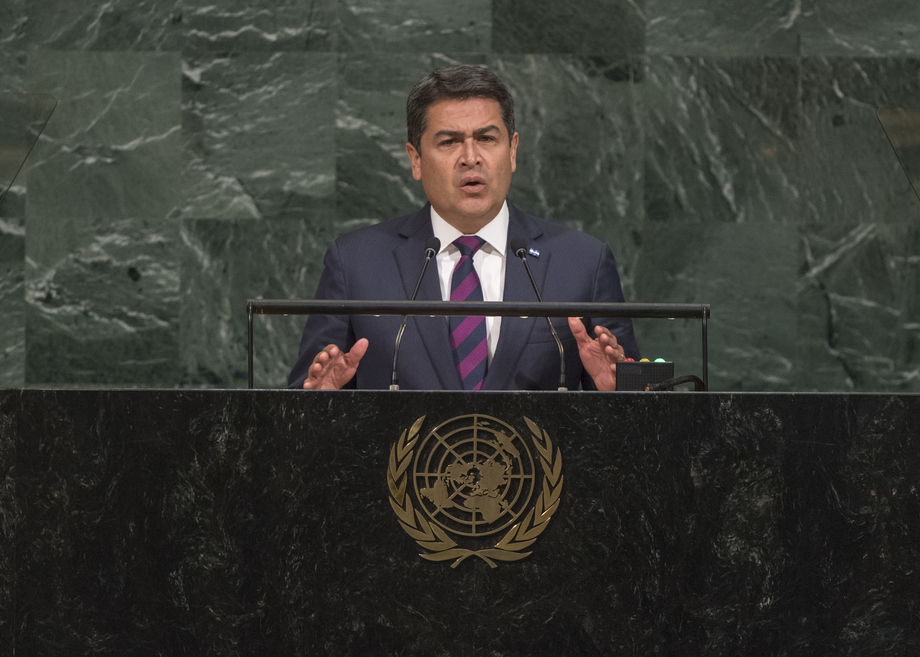 JUAN ORLANDO HERNÁNDEZ ALVARADO, President of Honduras, opened by expressing his condolences and support to the people of Mexico following the earthquake.  Turning to his country, he said that over the past four years there had been a push to build a “new Honduras” and that today it was safer and more prosperous.  The fight against transnational crime, bolstered by police reform, had brought homicide rates down by 30 per cent and economic reforms made Honduras a more stable investment partner as evidenced by growing exports, he said.  His nation, along with Guatemala, was moving to expand a customs union across the region, he added.  As this union worked to include El Salvador, Nicaragua, Costa Rica and Panama, it would become the seventh largest economy in Latin America.

Honduras sought to implement special employment zones to attract new investors, he said.  Those measures would attract foreign workers and improve working conditions for Hondurans while generating some 600,000 new jobs.  Efforts were being made to combat corruption, he continued, pointing to Honduras’ agreement with Transparency International to improve public sector administration.  Those improvements and new investments had transformed it into a modern logistics centre for Central America.

His country had made strides in addressing the Sustainable Development Goals, he said, focusing on Goal 1 by creating a programme to assist the most marginalized sectors of its population.  While inclusive international approaches to address poverty were needed, the methodologies used by developed countries to determine who needed assistance left middle-income countries in limbo.  Honduras would focus on providing social support mechanisms to avoid any citizen being deprived of basic needs.

Expressing support for United Nations reform, he said that it must be guided by the Secretary‑General to accomplish goals of the 2030 Agenda.  Through such reform countries begin to tackle the pressing issues of climate change, nuclear proliferation, poverty, transnational crime and terrorism, he said.

“Climate change has shown itself to be merciless,” he noted, pointing to the catastrophic hurricanes that had hit the Caribbean region.  Honduras rejected recent nuclear tests and supported Security Council resolutions and diplomatic channels seeking a solution.  Turning to poverty, he said that it had led to internal and external migration and called on host nations to treat Honduran workers with dignity and respect.  “It is painful for any person to leave behind their family, their customs, their homeland,” he said, and called on all to work together to build a better world.