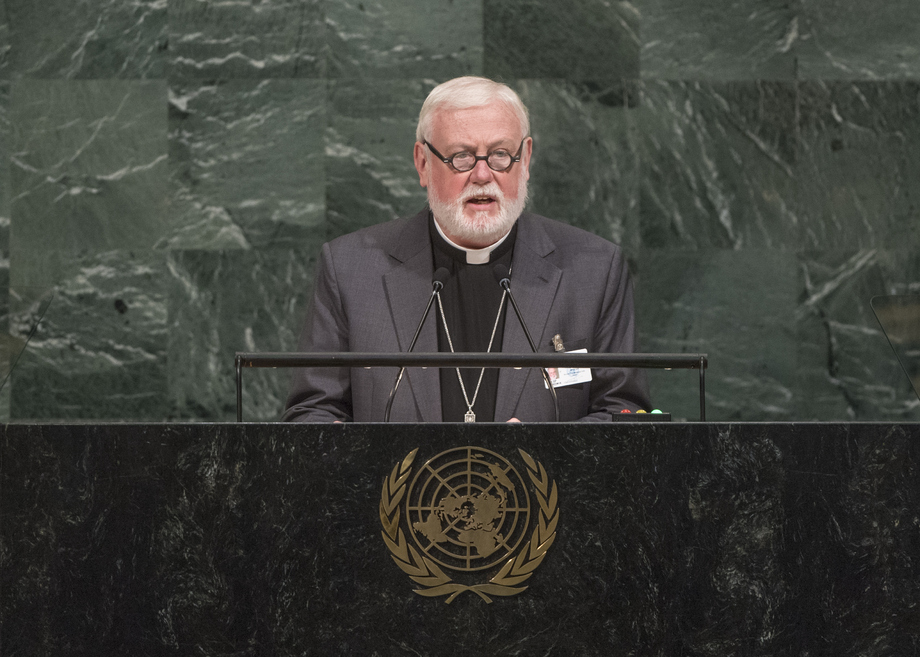 PAUL RICHARD GALLAGHER, Secretary for Foreign Relations of the Holy See, said focusing on people meant not only protecting them from heinous crimes but also placing them above all national and geopolitical interests.  It also meant safeguarding their dignity, human rights and fundamental freedoms, especially the rights to life and freedom of religion from which all other rights flowed and which provided the common foundation for peace, security and human development.

He went on to say that the 2030 Agenda and the Paris Agreement on climate change were effective measures to eradicate the evils and indignities faced by many today.  Pope Francis had called the Agenda an “important sign of hope”, but also had pressed the world to ensure that the legal commitments of that accord and others were fulfilled.  Compliance with such instruments could help countries work together for peace and avoid the “dangerous game” of exchanging threats.

Environmental degradation must be urgently addressed, he said, stressing:  “Any harm done to the environment is harm done to humanity, of today and tomorrow.”  While voicing support for efforts to facilitate obligations under the responsibility to protect concept, he said without a legal framework and respect for the rule of law, application of that principle would not be feasible.  Voicing concern over the situations in Yemen, Syria and Venezuela, among other places, and describing corruption and terrorism as other challenges to be addressed, he said that ultimately, people could only be protected if there was durable peace.  Lamenting the situations of migrants and refugees fleeing war and other challenges in Nigeria, Myanmar and Somalia, he reiterated Pope Francis’ call on countries to welcome, protect and integrate people fleeing such adverse conditions.  There was also a need to address the causes forcing people to leave, including persecution and both economic and environmental hardship.