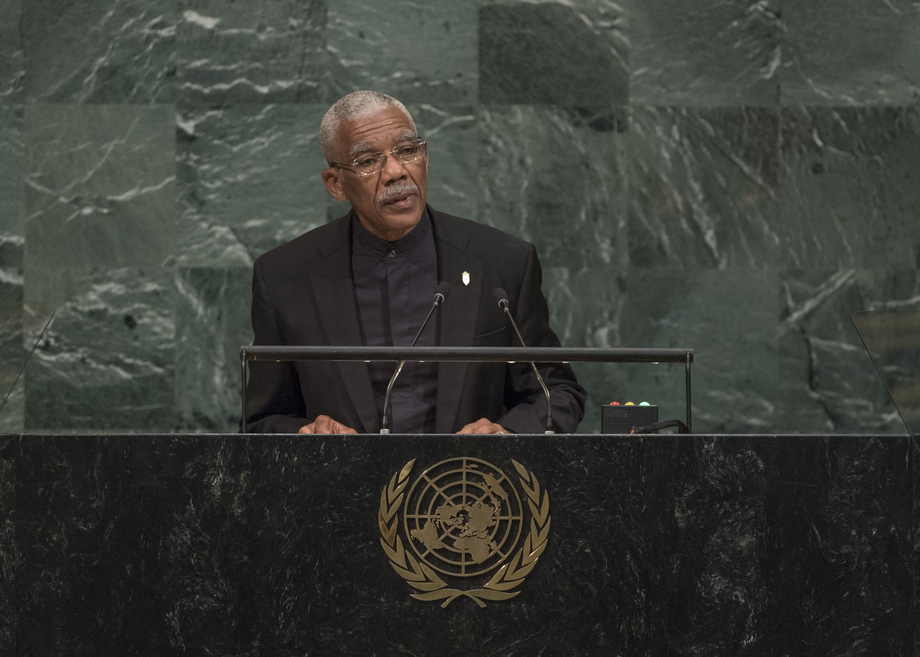 DAVID ARTHUR GRANGER, President of Guyana, said the world faced several humanitarian crises, including death from preventable disease, hunger, gender inequality, poverty, conflict and the refugee crisis.  The Sustainable Development Goals represented the collective determination to address those challenges. However, they were being obstructed by human rights violations and the involuntary migration of people due to terrorism and warfare.  “The challenge of the United Nations is to resolve to reinforce respect for the rights of citizens within the governance structures of our Member States,” he stated.

On climate change, he said the phenomenon was not a “fiction or the invention of a few extremists”.  Small island States in the Caribbean and parts of North America had suffered devastating hurricanes, which Guyana had provided relief.  Guyana also had signed and celebrated the Paris Agreement on climate change last year and renewed its commitment to its goals.  It also had dedicated 360,000 hectares of rainforest in 1989, and 20 years later, entered an agreement with Norway to reduce emissions and forest degradation.  Noting that his country was part of the “Guiana Shield”, the source of 15 per cent of the world’s freshwater reserves, he called on the United Nations to help protect that area as a global resource.

He emphasized that the “world is weary of war” and that peace must be humanity’s ceaseless quest.  The United Nations was the paramount global instrument for peace and, while ensuring respect for international law through the International Court of Justice and the Security Council, must aim to resolve long‑standing inter-State conflicts.  He expressed support for reforming the Security Council to give greater voice to developing countries.  Expressing deep concern for peace and the right to development, he reiterated support for a two‑State solution to the Palestinian-Israeli conflict, and the withdrawal of the economic embargo against Cuba.

Outlining the danger Guyana faced on its borders from territorial claims made by Venezuela, he said “disturbing” developments in that country had roused concerns over the privations of its people.  He reiterated the call for a “zone of peace” to be created, stressing that Venezuela’s claim to Guyana’s territory threatened that prospect.  Venezuela was more than four times the size of Guyana and claimed two thirds of its territory, including maritime space.  Guyana depended on its territorial and maritime resources for development and poverty reduction.  The border dispute had persisted since Guyana’s independence 51 years ago and despite an international Arbitral Tribunal settlement in 1899, which Venezuela denounced in 1962 in the Assembly’s Fourth Committee (Special Political and Decolonization).  “Peace will be at stake in our region if justice does not become ascendant,” he said, “not only within Venezuela, but also in respect to its border controversy with Guyana.”

Noting that four United Nations Secretaries-General had been “seized” of the matter, he called for a just and peaceful settlement in accordance with international law.  Former Secretary-General Ban Ki-moon and current Secretary‑General António Guterres had decided, under the 1966 Geneva Agreement, that the International Court of Justice would be the next means of settlement if significant progress was not made by the end of 2017.  To that end, Guyana had worked with the Secretary-Generals’ Personal Representative, and would continue to seek support from the international community to ensure that Venezuela did not impede judicial settlement processes.