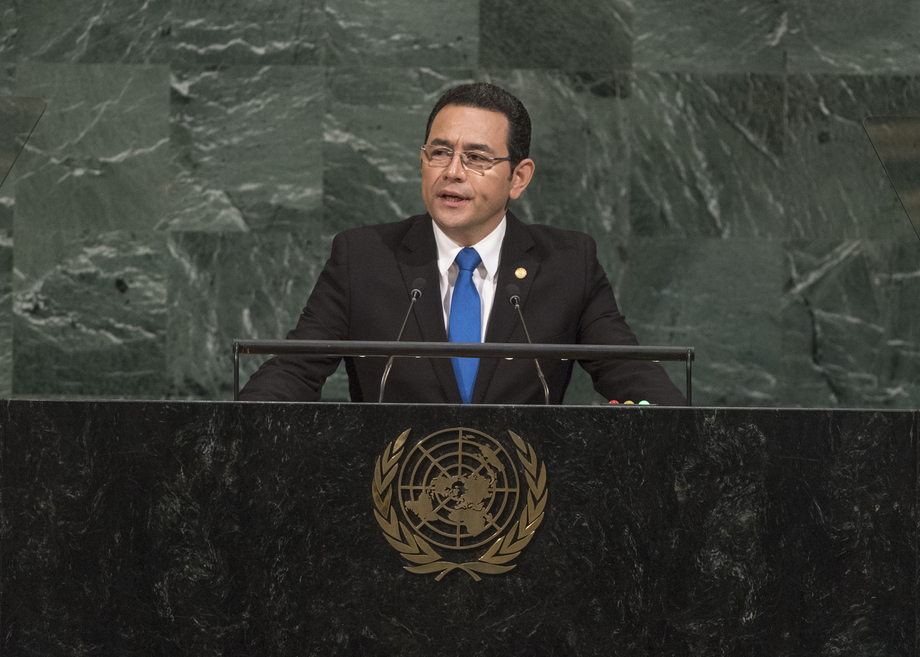 JIMMY MORALES, President of Guatemala, expressing solidarity with those countries in his region affected by storms and hurricanes, noted that his nation in 2017 had incorporated the Sustainable Development Goals into its national development plan.  In November, it would submit to its third universal periodic review before the Human Rights Council.  Guidelines for consultations for indigenous peoples, pursuant to the Indigenous and Tribal Peoples Convention, 1989 (No. 169), had also been drawn up.

The agreement between the United Nations and Guatemala that established the International Commission against Impunity in Guatemala was the first of its kind in the world, he said.  It was vital that it was complied with faithfully.  Having started its work in 2007, its mandate had been extended five times, demonstrating a firm commitment to strengthen and support its work, he said.

He underscored his Government’s increased spending on justice and its commitment to combating corruption and impunity.  Guatemala had also signed and ratified the Paris Agreement, he said, thanking the President of France for proposing a global compact for the environment.  The Government was working hard on a national strategy on malnutrition and collaborating with international partners to end crime, corruption and drug trafficking.
Institutional and international action on migration was an important issue for Guatemala, he said, including partnership with Mexico, Honduras and the United States.  Guatemala was counting on the efforts of Member States to negotiate an agreement on safe, regular and orderly migration.  Turning to the situation of “dreamers” in the United States, he said Guatemala hoped that the American people’s sense of humanity would lead to the United States Senate adopting legislation that would allow “dreamers” to enjoy legal status in that country.
Guatemala was proud to contribute to United Nations peacekeeping operations in the Democratic Republic of Congo and elsewhere in Africa, as well as in Haiti, he said.  It was honoured to continue to participate in the United Nations Mission in Colombia.  Strongly condemning acts of provocation and destabilization that threated international peace and security, he said the Democratic People’s Republic of Korea’s nuclear tests were flagrant violations of international law, Security Council resolutions and the Treaty on the Non-Proliferation of Nuclear Weapons.  Security for all could only come through a total prohibition of nuclear weapons.  He expressed concern over the political crisis in Venezuela and emphasized Guatemala’s commitment to resolve its maritime dispute with Belize through the International Court of Justice.