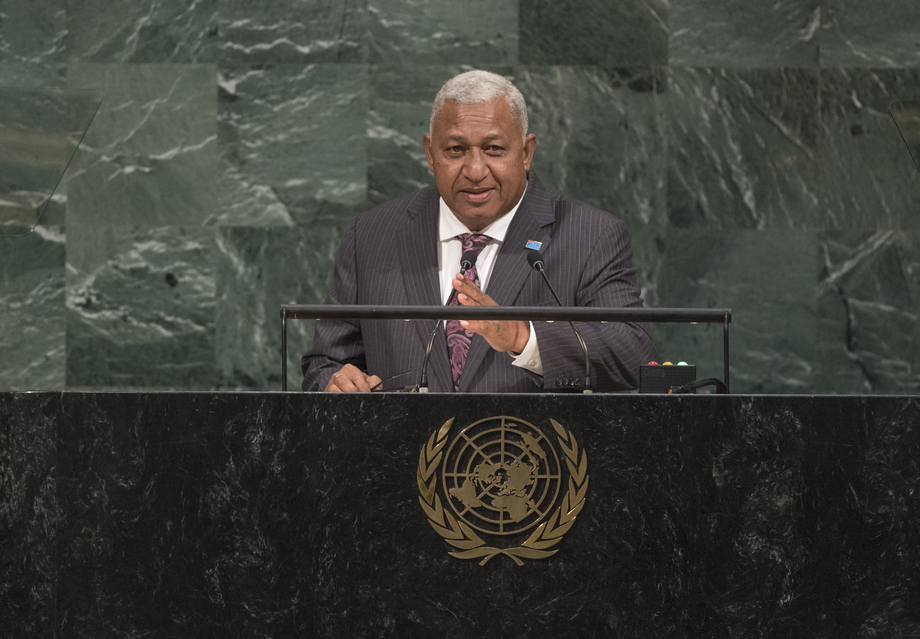 JOSAIA VOREQE BAINIMARAMA, Prime Minister and Minister for iTaukei Affairs, Sugar Industry and Foreign Affairs of Fiji, conveyed his sympathy to all the people in the Caribbean currently suffering the ravages of Hurricane Maria and Hurricane Irma before that.  Recalling that Fiji had lost 44 people and one third of its gross domestic product (GDP) in 2016 after being struck by the biggest cyclone ever to make landfall in the Southern Hemisphere, he said there was no time to waste.  The global community must work to restore the health of the oceans and tackle overfishing, he emphasized, welcoming the appointment of Ambassador Peter Thomson as Special Envoy for the Ocean.

He went on to stress Fiji’s contribution to United Nations peacekeeping, noting that while his country had suffered human loss in doing so, it took pride in helping to protect people in troubled parts of the world.

Millions of people were on the move because of drought and food insecurity, but “for the Fijian people, climate change is real,” he noted.  Whether it was whole villages moving out of the way of rising seas or salinity seeping into crops, global warming had changed Fiji’s understanding of its national interests.  He added: “It may be tempting for political leaders to show that they are protecting some national industry or near-term economic goal, but at what cost?”

Collective action was the only way forward, he said, highlighting his role as the next President of the Conference of Parties (COP23) — and the first Pacific Islander to serve in that role — which would take place in Bonn, Germany.  He emphasized the importance of the grand coalition of Governments, civil society, the private sector and ordinary citizens.  Vowing to “do things in Bonn differently”, he outlined how he would work to move the climate action agenda forward.  Climate activists, cutting-edge companies, and artists were welcome to participate, he added.

He went on to state that it was essential to make special provisions for the world’s most vulnerable people, who lacked the basic resources to deal with natural disasters, “because without insurance, restoration and rebuilding is simply too great a burden for many”.  Encouraged by the rapid development of clean, affordable alternative energy solutions, he said that such innovations offered great promise.

“I am in no doubt that the role that I have embraced as COP23 President is the most important any Fijian leader has undertaken,” he said, appealing to Pacific leaders to support him in tackling the world’s greatest challenge.  “We are all in the same canoe,” he pointed out.