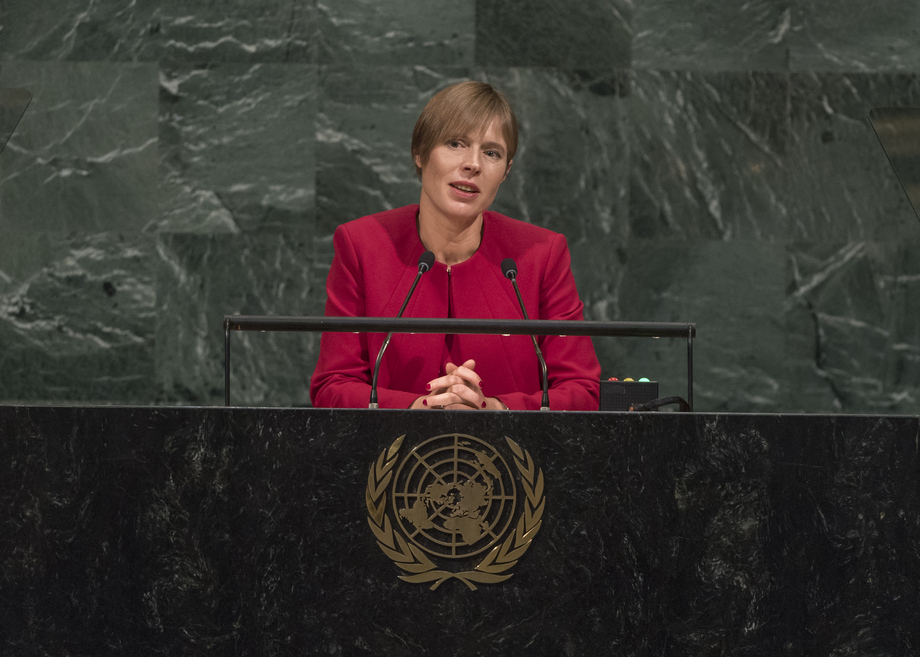 KERSTI KALJULAID, President of Estonia, said that much of the disruption the world was facing stemmed from climate change, which could be countered by a rapid technological disruption of “our wasteful ways of life”.  Estonia was a nation of just over 1 million people and had gone through a rapid transformation in the past 25 years.  Its economic and social statistics demonstrated it was good at protecting its weakest while growing its economy.  “We know it can be done,” she stressed, noting that her country’s guiding principles were the rule of law, checks and balances, and individual rights.

She also noted that Estonia was aspiring to become an elected member of the United Nations Security Council for the period of 2020 to 2021, emphasizing that as a small State with a long history of being occupied, it was well-positioned to understand the plight of the world’s most vulnerable.  There were too many States in the world which suffered from unresolved conflicts.  Ongoing military aggression in eastern Ukraine continued to stir conflict and cause casualties amongst the civilians.  The Crimean Peninsula remained occupied, as did parts of Georgia.

The world had lost half a million people in Syria alone, she said, adding that it was critical to hold responsible those who had committed human rights and humanitarian crimes.  The world must not overlook the escalating human suffering in Yemen, South Sudan, Somalia and Nigeria.  On the Democratic People’s Republic of Korea, she said the situation remained an acute threat to world peace, and added that the key to countering terrorism and violent extremism lay in cooperation at all levels.

It was vital to address the root causes and drivers for irregular migration to improve border management and fight trafficking in human beings, she continued, recalling the “bitter lesson” from Estonia’s history when its people were dispersed around the world during the Second World War.  It had taught Estonia the importance of empathy towards refugees fleeing the atrocities of war and destruction.  Tackling migration also meant tackling climate change, which had become the defining issue of modern times.  Such massive universal problems could only be tackled by inclusive societies.  Women had a critical role to play particularly in conflict situations, she said, emphasizing the need to achieve gender balance in peace processes.  Gender-based violence must be done away with, she stressed, adding that survivors must be treated with dignity and perpetrators of the crimes held accountable.

She went on to share her country’s experience on how best to utilize e-governance to achieve sustainable development and at a lower cost.  Digital change was everywhere, making geography obsolete in some ways.  A digitally enhanced global civil society functioned better when States provided their people with a safe means of digital communication.  She urged Governments to catch up on that front.  Greater dependence on electronic services had resulted in greater vulnerability in cyberspace, she continued, adding that that did not mean stopping digital progress.  It meant that Governments must do more to analyse how international law applied to the use of information and communications technology (ICT).