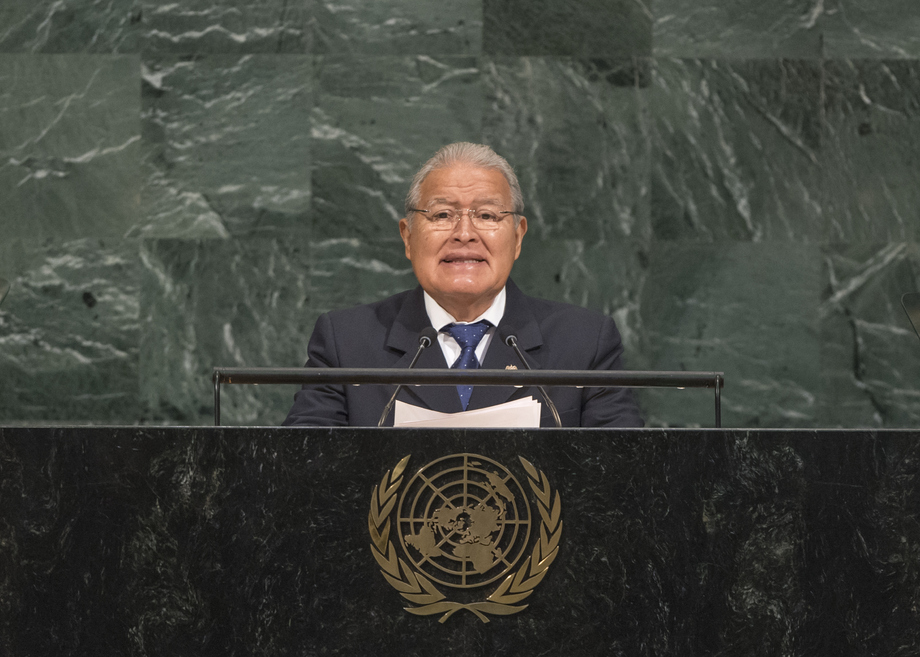 SALVADOR SÁNCHEZ CERÉN, President of El Salvador, said the 2030 Agenda had done a great job at boosting dialogue among nations.  At the national level, El Salvador had adopted a development programme which aimed to reduce extreme poverty and provide quality education to all.  There had already been a reduction in chronic child malnutrition, he pointed out, emphasizing the need to include the issue of food security in all sustainable development initiatives.

A climate favourable to foreign investments was imperative, he continued, stressing that major fiscal challenges lay ahead for his country.  Sustainable development also required an environment of peace and security, he added, highlighting how El Salvador, through forging partnerships with different actors, had already seen a drop in homicides and extortion.  In the same vein, without a strategy of financing, implementing the 2030 Agenda would be “very complicated”.

As a middle-income country, El Salvador believed it would be productive to eliminate economic and growth measurement solely based on gross domestic product (GDP), he continued.  A multidimensional measure scale was essential.  In addition, responsibilities must be fairly shared between debtors and creditors.

Outlining how El Salvador was focusing on inclusion in society, he said that migration was an opportunity to guarantee human development and do away with xenophobia and stigmatization.  Migrants participated positively in both transit and destination countries, he stressed, underscoring the immense contributions immigrants made to the societies that received them.

He also said that as a country which had suffered from more than a decade of armed conflict, El Salvador understood first hand the power of resolving disputes through dialogue and communication.  He called for an end to the economic blockade on Cuba by the United States, adding that it was time to better relations between the two countries.  He also expressed concern that weapons of mass destruction were posing a real threat to humanity.  Concluding, he said that climate change was increasingly compromising economic development and the well-being of countries, including in his region.