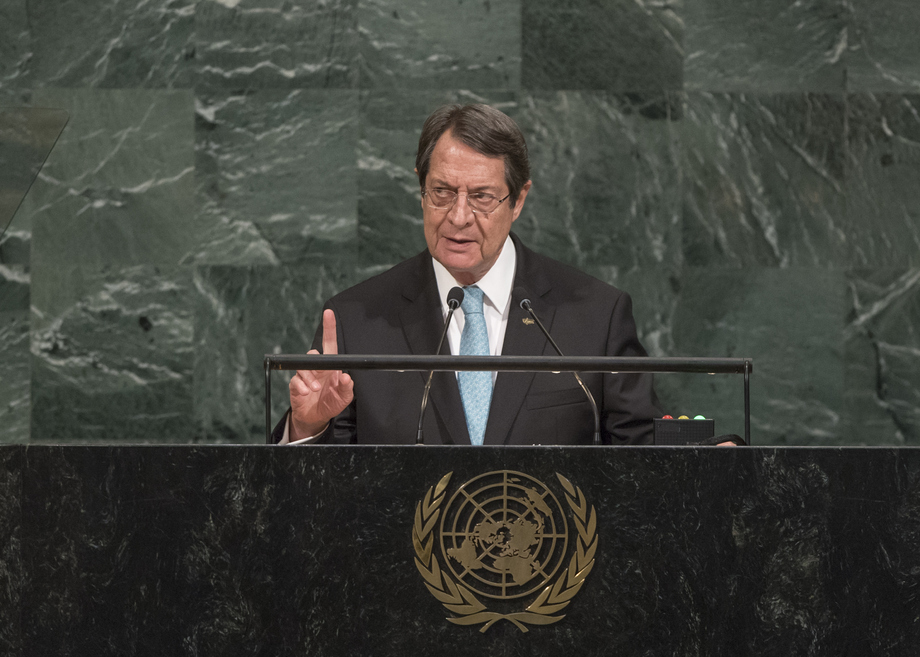 NICOS ANASTASIADES, President of Cyprus, said multilateralism was the only way to achieve such global goals as the preservation of the planet, the peaceful resolution of conflicts and the eradication of terrorism.  It was only through collective efforts that countries could address the crisis involving the Democratic People’s Republic of Korea, which threatened the world’s non-proliferation and disarmament regimes, and the region’s peace and security architecture.  Cooperation was also crucial for tackling terrorism, which had become commonplace from Baghdad to Kabul, Paris to Cairo and from Barcelona to London.

“There is no security without development, and there is no development without security,” he said.  Enhancing the resilience of societies was a key aspect of multilateral endeavours, and thus, international determination to implement the 2030 Agenda for Sustainable Development must remain a priority.  Sustainable development was at the heart of addressing the causes of the forced migration which had dominated the global agenda for two years, putting pressure on Governments and societies alike, and changing the way political dialogue was carried out.  Underlining the need for solidarity and burden-sharing — as well as for a just and effective global governance system — he expressed support for the Secretary-General’s reform priorities to ensure that, at a time of growing scepticism and isolationist tendencies, multilateralism remained relevant and effective.

The Assembly’s focus on people was pertinent for Cyprus as it struggled from the scourges of war and its ongoing violent division, he said.  Ensuring the full independence, territorial integrity and sovereignty of all Member States was crucial.  Yet, Cyprus continued to endure the consequences of a blatant violation of those principles by Turkey, which had invaded Cyprus in 1974 and now occupied the island.  Recalling that the pretext for that invasion had been to restore constitutional order, he said 37 per cent of Cyprus had been occupied and its population forcibly displaced.  Thousands had been murdered and more than 1,000 Greek Cypriots were missing.

“It is not my aim to engage in a blame game,” he said, expressing regret that despite his country’s constructive stance, talks on that issue were again deadlocked.  Cyprus was established in 1960, with Turkey, United Kingdom and Greece undertaking a guarantee of its independence, territorial integrity and security.  However, Turkey had exploited that provision.  In recent negotiations, the Secretary-General had presented six fundamental thematic topics consisting, on the one hand, of the Chapter of Security and Guarantees — including the withdrawal of foreign troops — and, on the other hand, issues related to the internal aspects of the Cyprus problem.  Achieving convergences on that framework would have led to a strategic agreement and injected a dynamic new impetus, as well as hope that an overall settlement was feasible.

Responding to the statement delivered this week by the President of Turkey, who attributed the unsuccessful outcome of recent negotiations to the Greek Cypriot side, he underscored Cyprus’s aspiration to establish an independent and sovereign State free from the presence of occupying troops.  “Is it irrational to advocate for the establishment of a normal State in which all decisions will be taken only by its citizens, free from foreign dependencies?” he asked.  His vision was only to end the unacceptable status quo.  In that context, he called on Member States to support the convening of a new conference on Cyprus, and efforts to avoid a repetition of past shortcomings.