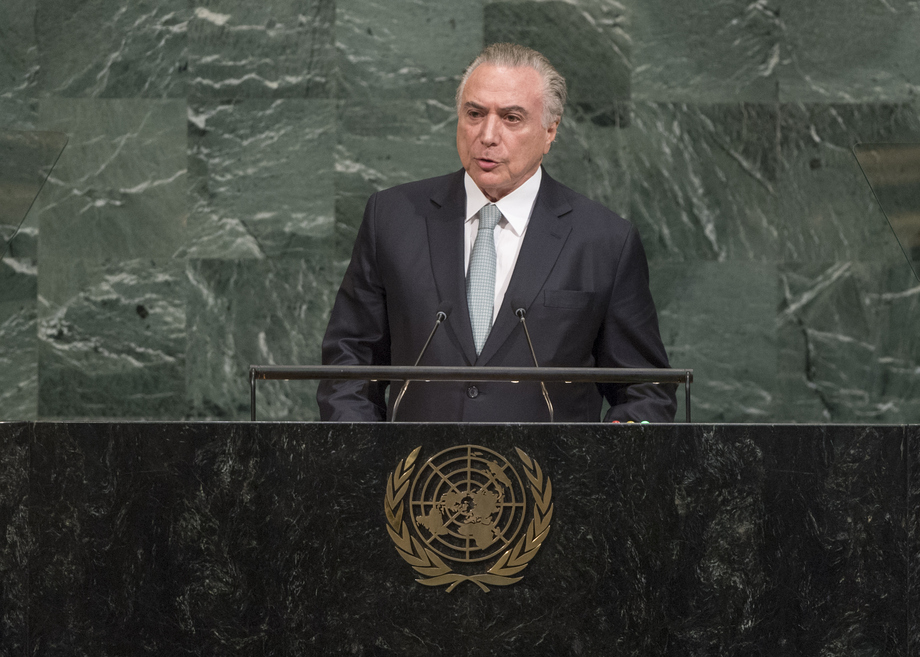 MICHEL TEMER, President of Brazil, said that while the aspirations of the United Nations founders had not been entirely fulfilled, the Organization had stood for hope and the possibility of a more just world for more than 70 years.  It stood for a world where no one faced discrimination, oppression or extreme poverty; a world where consumption patterns were more in line with present and future generations.  This time in history, marked by so much uncertainty and instability, required more diplomacy, negotiation and multilateralism; not less.  It was imperative to reform the United Nations, and particularly to expand the Security Council, aligning it with twenty-first-century realities.  He rejected exacerbated forms of nationalism and protectionism as a “way out” from economic difficulties.

He said Brazil’s commitment to sustainable development was at the top of its public actions, both on the national and international levels.  The country was dedicated to achieving the Sustainable Development Goals and advocating the Paris Agreement.  “We must act now,” he emphasized.  Clean and renewable energy in Brazil accounted for more than 40 per cent of its energy mix, and the country also served as a leader in hydropower and bioenergy.  He expressed pride that Brazil had the largest tropical forest coverage on the planet, stressing that deforestation was also of great concern.  Brazil was committed to an open and rules-based international trade system, ultimately centred on the World Trade Organization (WTO) and its dispute settlement mechanisms.

Recalling that Brazil had taken a lead role in drafting the Treaty on the Prohibition of Nuclear Weapons, he emphasized the importance of banning nuclear technology for non-peaceful purposes.  There were lingering issues of real concern on the peace and security agenda, notably the recent nuclear tests on the Korean Peninsula, which constituted a threat to all.  On the Middle East, he expressed concern that talks between Israel and Palestine had come to a halt, while on Syria, he said the recent de-escalation of violence had not prevented the conflict from continuing with dramatic humanitarian consequences.

A clear recognition of the connection between peace and development was required, he said, stressing that repeated episodes of cowardly violence and terrorism should not allow for the weakening of tolerance and inclusion.  Transnational crime, including the trafficking of people, drugs and money, undermined the security and peace of mind of families.  Human rights violations were a recurring fact, including those that compromised civil, political, economic and social rights.  Stressing that people must be allowed to live in dignity according to their own principles and choices, he rejected racism, xenophobia and all forms of intolerance.  Brazil had one of the world’s most advanced laws on refugees and had recently updated its migration law, anchored on the principles of humanitarian assistance.
Indeed, Brazil was experiencing a period of decisive and sweeping changes following its unprecedented economic crisis, he said.  Since then, the Government had worked to restore fiscal balance and economic credibility, having learned the importance of applying the rule that, without fiscal responsibility, social responsibility was nothing but empty rhetoric.  Brazil was more open to the world, an attitude it brought to the United Nations and all other forums in which it participated, working towards a more prosperous and democratic South America, while also seeking greater cooperation and partnership for development in Africa.  In Europe, Brazil was working to boost trade and investment flows, and in Asia, the country had expanded relations with both traditional and new partners.