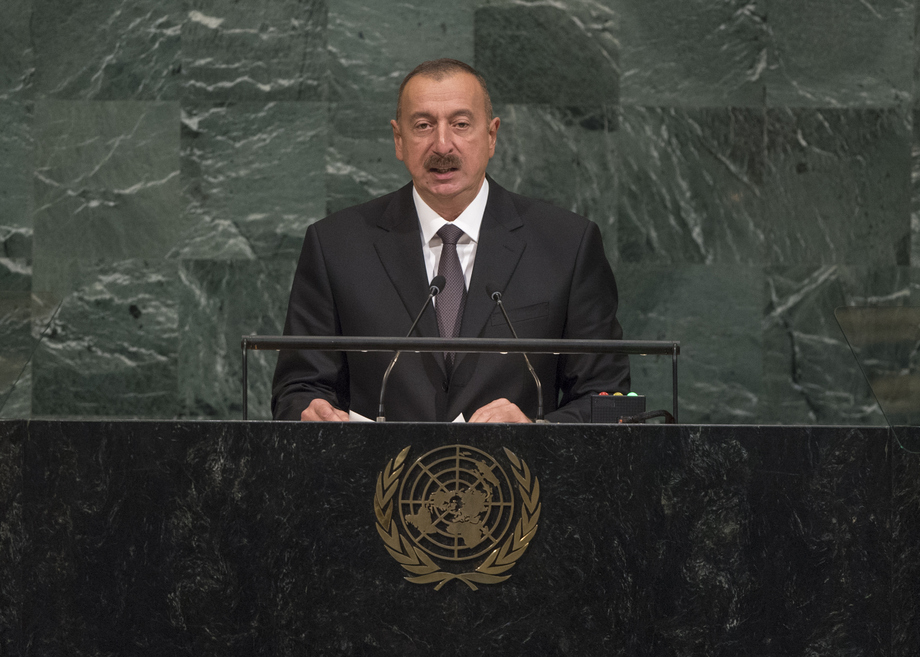 ILHAM HEYDAR OGLU ALIYEV, President of Azerbaijan, said a large percentage of his country was under occupation, with more than 1 million Azerbaijanis currently displaced.  Security Council resolutions calling for the withdrawal of Armenian troops from Azerbaijan had gone unheard.  Other international organizations had adopted similar decisions and resolutions, yet they had not been implemented by Armenia, which continued to ignore the international outcry, without punishment.  That dynamic was an unacceptable double standard.  Sanctions must be imposed on Armenia, which had done nothing to improve the situation and had blocked substantive negotiations.  He questioned how such a corrupt, failed State could violate international law for so many years and ignore Council resolutions.  The answer was the existence of a double standard.

He lamented that no sanctions had been imposed on Armenia, a policy that must be stopped.  The aggression carried out by Armenia was not only an injustice, but also created the illusion that the country could continue its current actions.  Armenia’s leaders should not forget that Azerbaijan would go to any length to protect its sovereignty.  Urging the international community to stand against Armenian fascism and terror, he said Azerbaijan was committed to the peaceful resolution of the conflict, but at the same time, would defend its citizens, in line with the United Nations Charter, and if necessary, punish the aggressor as it had done in April 2016.  Azerbaijan’s territorial integrity must be restored, he insisted.

Despite such challenges, Azerbaijan was an engaged member of the United Nations, he said.  All fundamental freedoms were fully provided, including the freedom of speech, media freedom, freedom of assembly and religious freedom.  Azerbaijan was a centre of multiculturalism, with all religions and ethnic groups living in peace and harmony.  It recognized multi-ethnicity as an asset and had hosted several interreligious dialogues in recent years, including one in partnership with the United Nations Alliance of Civilizations.  Further, the main goal of the Baku Process was aimed at strengthening dialogue and partnership between the Muslim world and Europe, he added.

On the economic front, he said Azerbaijan’s economy continued to grow exponentially, while unemployment was among the lowest levels in the world at 5 per cent.  Poverty was also on the decline.  In 2015, Azerbaijan had received a South‑South award recognizing its achievements related to the Millennium Development Goals.  The country was also highly ranked on the human development scale, and exported not only agricultural goods, but also intellectual products, while its zero tolerance towards corruption and bribery made it attractive to investors.  In 2015, Azerbaijan also had received a United Nations public service award.

He went on to note that without international support, Azerbaijan had built almost 100 new settlements for refugees and internally displaced persons suffering from Armenian occupation.  Schools and hospitals were being built, and literacy was close to 100 per cent.  Almost half of the population received a free annual medical check-up, courtesy of the State.  With help from its international partners, Azerbaijan was also close to completing a gas corridor, among the world’s largest infrastructure projects.  It was using its location to become a leading transport hub in the Euro-Asia region, and had built 11 new airports and millions of miles of highway.  The country’s modern ship-building yard could manufacture all types of ships, he said, while emphasis had also been placed on modernizing its railroad infrastructure.