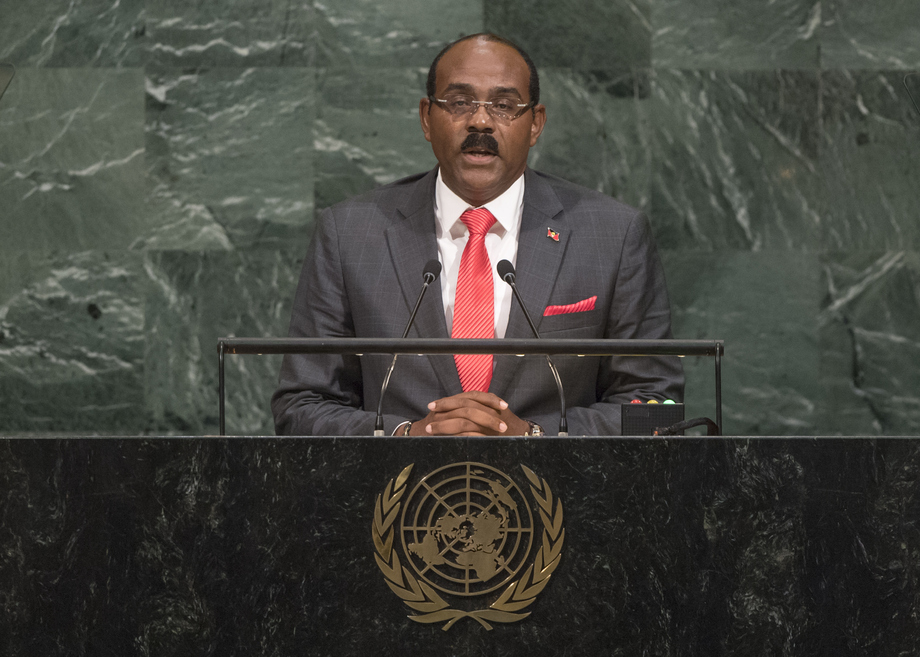 GASTON ALPHONSO BROWNE, Prime Minister and Minister for Finance and Corporate Governance of Antigua and Barbuda, recalled how on 6 September, his two‑island State was victim to the ferocity of Hurricane Irma.  “The island of Barbuda was decimated; its entire population left homeless,” he said.  Describing the sheer difference in size, he noted that Barbuda was 62 square miles while Hurricane Irma was 375 miles wide.  “Barbuda did not stand the faintest chance,” he said.  “For the first time in over 300 years, there is now no permanent resident on Barbuda.”  The residents were moved to Antigua, whose population increased by 3 per cent overnight.

The residents of Barbuda were now anxious to return to their homeland but the island remained unfit for human habitation, he said.  There was no electricity, no potable water, and 95 per cent of the buildings had been damaged or destroyed.  The preliminary estimates had placed the cost of rebuilding Barbuda at about $250 million, he said, adding: “It is simply a stretch beyond our reach.”  Antigua and Barbuda urgently required assistance from the international community, he continued, adding:  “We have not stretched the palm of our hand because we crave, we plead because we need.”  He thanked the first responders, particularly from Venezuela, who “went above the call of duty”, as well as all donors.

The present international financial architecture was leaving small States such as Antigua and Barbuda behind, he said.  Two Category 5 hurricanes in 12 days hit the Caribbean.  That could no longer be dismissed as “vagaries of the weather”.  Climate change was man-made, and must be attributed to nations that consumed 80 per cent or more of the world’s energy and emitted dangerous levels of pollution.  All 14 Caribbean nations together produced less than 0.1 per cent of global emissions.  “The unfairness, injustice and inequality are painfully obvious,” he said, urging the international community to provide financing at concessionary rates without artificial impediments.
Like many small island States, his developing country was categorized as “high-income” thus denying it access to grant funding, he said, adding that the per capital income criterion was skewed.  He asked:  “Where is the justice in large wealthy countries borrowing on their capital markets at 3 per cent, while so-called ‘high-income’ small island States are forced to borrow commercially at 12 per cent?”  It was irrational to graduate a small island State that could not pay its debts to high-income status.