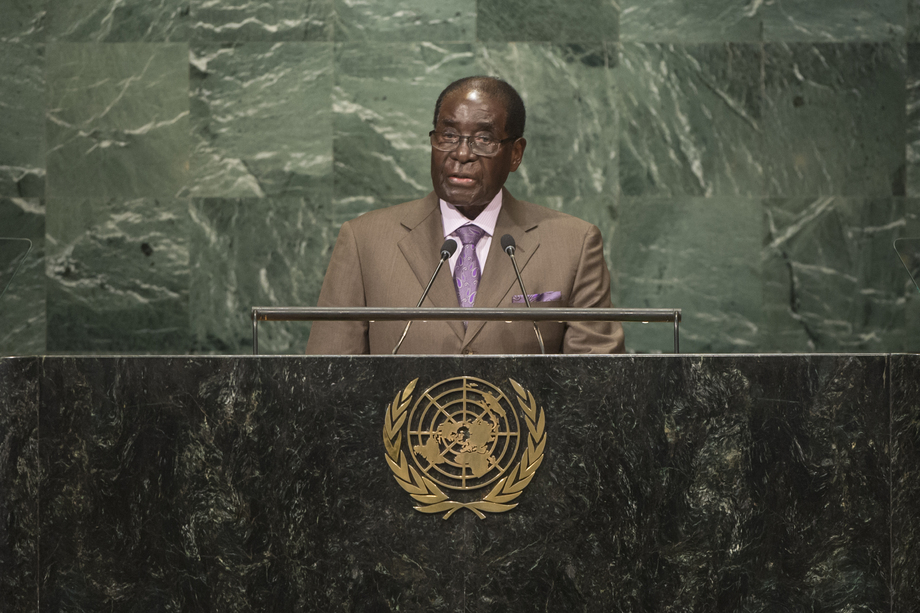 ROBERT MUGABE, President of Zimbabwe, said that, while compromises were unavoidable in developing the 2030 Agenda for Sustainable Development, half-measures had no place in its implementation.  “We need sincere, genuine and total commitment by all,” he stressed.  For its part, Zimbabwe had established multistakeholder and multisector structures to implement the Agenda, alongside the national Zimbabwe Agenda for Sustainable Socioeconomic Transformation.  Indeed, domesticating the new Agenda had been less challenging in that its vision was basically the same as the national agenda.

However, he noted, the biggest impediment to his country achieving the 2030 Agenda was the burden of sanctions, notably imposed by the United States and other Western countries for 16 years.  For exercising a principle enshrined in the United Nations Charter — sovereign independence — “we are being punished for doing what all other nations do,” he said, “responding to and looking after the basic interests of our people.”  As long as those economic and financial sanctions remained, Zimbabwe’s capacity to implement the 2030 Agenda would be curtailed and he called on the United Kingdom, United States and their allies to remove them.

While there had been commendable efforts to make the selection of the next Secretary-General transparent, the General Assembly’s greater involvement did not mask the opaqueness of the process in the Security Council, he said.  The United Nations was no closer to achieving Council reform than 20 years ago and he urged States to redress that injustice.  Furthermore, Palestinians had lived under occupation for 49 years and it was high time for the Council to implement resolutions 181 (1963), 242 (1967) and 338 (1973).  The two-State solution, based on pre-1967 borders should be pursued within set parameters and timelines.

Finally, he said, the United Nations was obliged to work towards fully realizing the rights of self-determination for the people of Western Sahara and he urged that an independence referendum for Saharans be held without delay.  He also welcomed the Secretary–General’s leadership in mobilizing the international community to partner with Africa in stopping the Ebola epidemic, which had claimed thousands of lives.