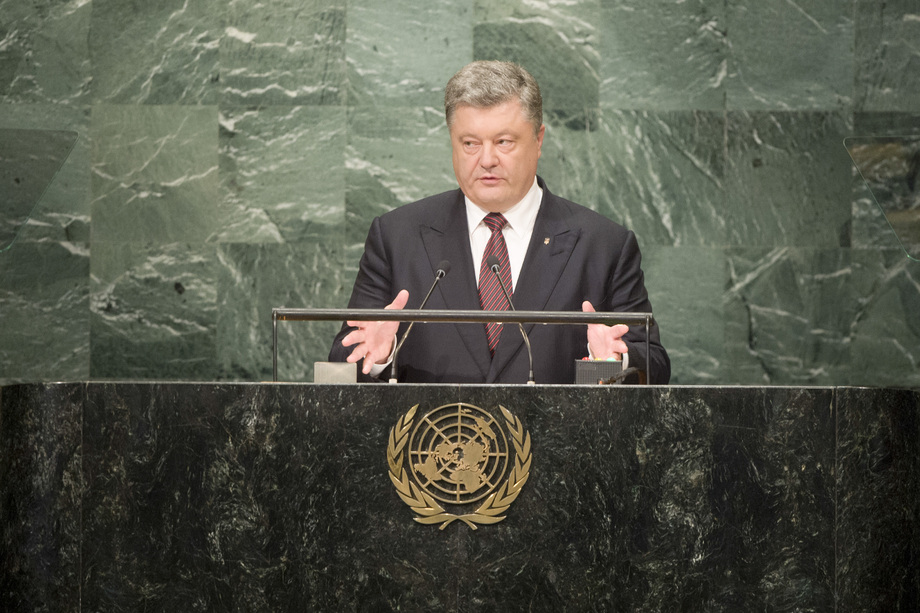 PETRO POROSHENKO, President of Ukraine, said that never since the end of the cold war had international norms been unilaterally defied on such a scale.  Never had a Security Council member been a major violator of the United Nations Charter, and instigator of and participant in a conflict in which it was also a mediator.  “This is actually the biggest threat facing humanity,” he said.  “Our future depends on how we manage to overcome it.”  The international community could face the problem or turn a blind eye and leave the United Nations future to the mercy of one player who blatantly violated its Charter.  The price for the latter would be in human lives.  Furthermore, the Security Council could not remain deadlocked on key issues of peace and security.  Veto suspension in cases of mass atrocity and where a permanent Council member was party to a dispute should be “a rock solid rule”.  The United Nations must be able to act against aggression and bring justice to perpetrators.

Over the last year, Ukraine had become a testing ground for hybrid warfare, he said, with effects seen in Europe and beyond.  Propaganda, electoral interference, cyberattacks and misuse of diplomacy were methods of that undeclared war and it was time for the Council to address it.  Turning to the matter of the Korean Peninsula, he expressed concern for the non-proliferation regime, as his country had voluntarily dismantled its nuclear arsenal.  “Let’s be frank, we failed to pass the exam with the Budapest Memorandum [on Security Assurances],” he said.  Council action in response to the North Korean nuclear test was another test.  “We must not allow plunging the world into a new nuclear arms race,” he said.  The next Secretary-General must be uncompromising on respect for the United Nations Charter and ready to use all tools, including under Article 99.

Terrorism, he said, could only be confronted through joint efforts and must include the protection of crucial infrastructure, noting that banking, air and rail transport, and water supply were at all risk.  He welcomed the United Kingdom initiative to convene a ministerial meeting to confront such threats.  Furthermore, resolution 2166 (2014) must be implemented regardless of the Russian Federation’s veto against the creation of an international tribunal.  The Joint Investigation Team must set up a mechanism to bring the perpetrators to justice.  Since 2014, the terrorist component of the undeclared hybrid war against Ukraine had become a daily routine in Donetsk and Lugansk, with evidence of Russian involvement in the financing, sponsorship and coordination of terrorist groups.  There were 38,000 illegal military forces in Donbass, mercenaries from and armed by the Russian Federation, which sent manpower daily across the border.  The Russian Federation had insisted it had nothing to do with such activities and that Russians were not in Ukraine.  “They are there,” he said, adding that a sham referendum had been conducted at Russian gun point.

In the third year of aggression against Ukraine, the death toll had reached 10,000 people and hundreds were being unlawfully held, he went on to say.  The Russian Federation had backed illegal armed formations in Donbass and had taken children as hostages.  He urged the United Nations Children’s Fund (UNICEF) to prevent abuses of those children, stressing that in the past year, Ukraine had shown its readiness to advance implementation of the Minsk agreement and the peace plan agreed in September 2014.  It was time for the Russian Federation and its proxies to free captives and withdraw weapons from regular and irregular units.  As well, repressive policies were being carried out in Crimea, where judicial and penitentiary systems had been turned into a tool for the Russian Federation against Tatars and Ukrainians.  He cited the ban against the Mejlis activities in that regard and detention of its deputy head in a psychiatric facility.  He urged the Russian Federation to allow human rights groups access to Crimea and Donbass, cautioning against a repeat of the genocide of Crimean Tatars.  Ukraine would submit a draft resolution on the human rights situation in Crimea to the General Assembly, and he appealed to all Member States to not recognize the legitimacy of the recent election in occupied Crimea.  The Russian Federation had used Crimea to protect its aggression policy in Ukraine and in Syria, where such policies went hand-in-hand with war crimes and crimes against humanity.

The representative of Ukraine, referring to remarks by the Minister for Foreign Affairs of the Russian Federation, said the situation in Ukraine had been caused by Russian aggression against his country.  Russia had been urged time and again to halt its aggression.  Noting that the Minister had quoted from “Animal Farm”, he quoted from “1984” the phrase “war is peace, freedom is slavery, ignorance is strength”.  That was the philosophy that Russia wanted to impose.