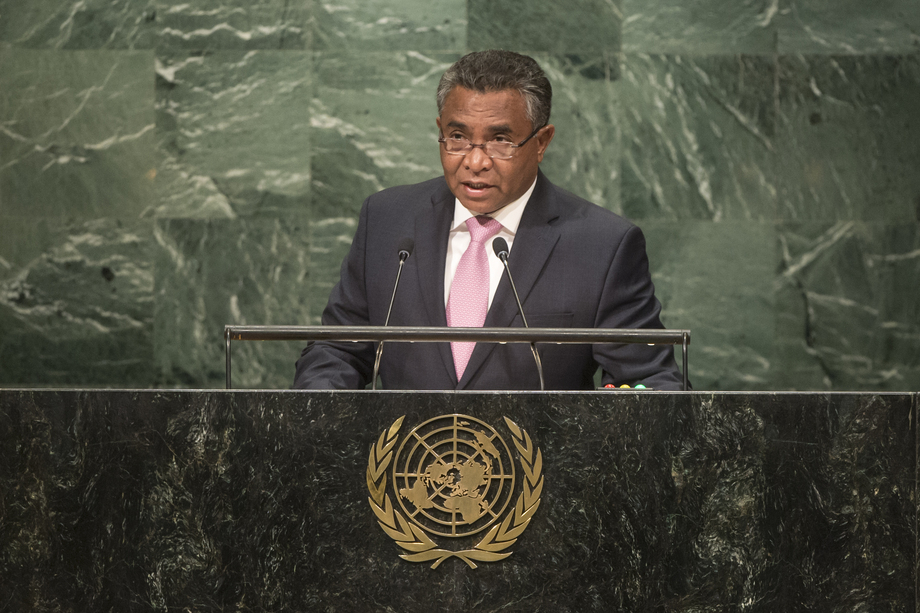 RUI MARIA DE ARAÚJO, Prime Minister of Timor-Leste, said that promoting intergovernmental coherence while strengthening the Peacebuilding Commission and partnerships would improve the United Nations system.  “Our joint efforts need to be able to respond more effectively to the challenges facing our nations and peoples,” he said, expressing concern over inequality and conflicts.  International peace and security could only be maintained if countries became an integral part of solutions to problems.  Regional integration generated opportunities for economic development and contributed to national and regional peace and stability, he said, adding that his country aspired to join the Association of Southeast Asian Nations (ASEAN) for the opportunity to fulfil the dreams of its people.

“Without peace and stability, we cannot think of development,” he continued, reiterating his commitment to the 2030 Agenda for Sustainable Development.  In 2015, Timor-Leste had joined a group of eight other countries to serve as models for implementation of the 2030 Agenda, and the Government had formed an inter-ministerial working group to map indicators for the Sustainable Development Goals.  It had selected 20 targets to monitor their implementation.  Among other things, Timor-Leste would convene a high-level international conference in March 2017 to discuss ways to advance the 2030 Agenda under the most difficult circumstances, he said.  “We are committed to show our youth how important their role is in achieving these Goals,” he said, calling upon all stakeholders to contribute.  While it was not an easy exercise, the Government was working towards harmonizing the Goals with national activities and budget.

He went on to note that the situation of refugees and migrants remained unresolved and deserved further focused attention and support.  “We need to establish a frank political dialogue and international partnerships to ensure continued respect for human rights and humanitarian assistance,” he said.  Having experienced conflict, Timor-Leste knew only too well the high price of war and was ready to contribute to United Nations peacekeeping operations.  Furthermore, it had ratified the relevant conventions and strengthened its commitments to fight terrorism and organized crime.  Turning to the issue of maritime boundaries, he emphasized that, even 14 years after Timor-Leste had become the 191st Member State of the United Nations, it had not defined its maritime boundaries with Indonesia and Australia.  “The delimitation of our maritime borders will ensure our sovereign rights and give us certainty with respect to what belongs to us,” he said.  Delimitation was also essential in order to ensure economic stability and self-sufficiency, and to create a better future for Timor-Leste’s people.  For that reason, the Government had started a process of compulsory conciliation in April in order to resolve disputes under the United Nations Convention on the Law of the Sea, he said, adding that he was confident the panel of experts would contribute to an amicable solution.