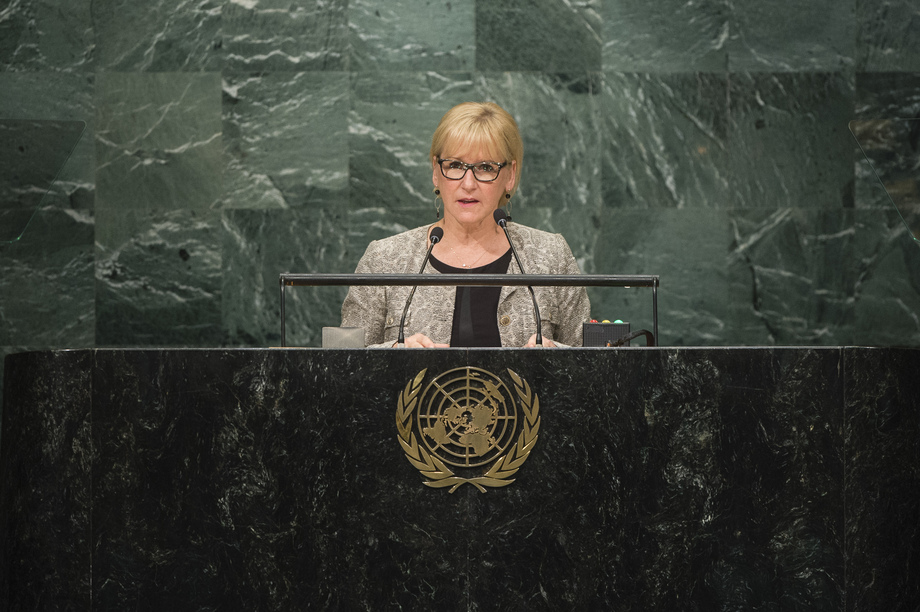 MARGOT WALLSTRÖM, Minister for Foreign Affairs of Sweden, warned the Assembly that “the basic tenets of our coexistence are being challenged,” and emphasized the need to respond to rising xenophobia, aggressive nationalisms, autocracy and fear-mongering.  She reminded the international community of its responsibility to protect the 65 million refugees fleeing from harm, and welcomed the New York Declaration on Refugees and Migrants as a first step in that direction.

She went on to address several key areas that she believed required determined action by the international community:  prevention of armed conflict, gender equality, financing, security, the Middle East peace process and post-conflict development assistance.  On peacekeeping, better measures were needed to prevent armed conflict, including early warning and early action systems.  Those mechanisms would require sustainable financing of regional and sub-regional organizations’ peace operations.  On gender equality, she called for the United Nations to lead the way in enhancing the rights, representation and resources of women and girls around the world.  One way the Organization could do that was through increasing women’s participation in peace processes, protecting them against gender-based violence in humanitarian crises and strengthening their political and economic empowerment.  For peace to be sustainable, the root causes of conflict needed to be tackled.  She regretted that peace accords had not been implemented in the Middle East and Security Council resolutions pertaining to Crimea had been disregarded.  Finally, to sustain peace, greater investments were needed in post-conflict development and State-building.  She pledged her country’s commitment to “continue to talk with, not only about, countries” in its capacity as a non-permanent member of the Council during the 2017-2018 term.