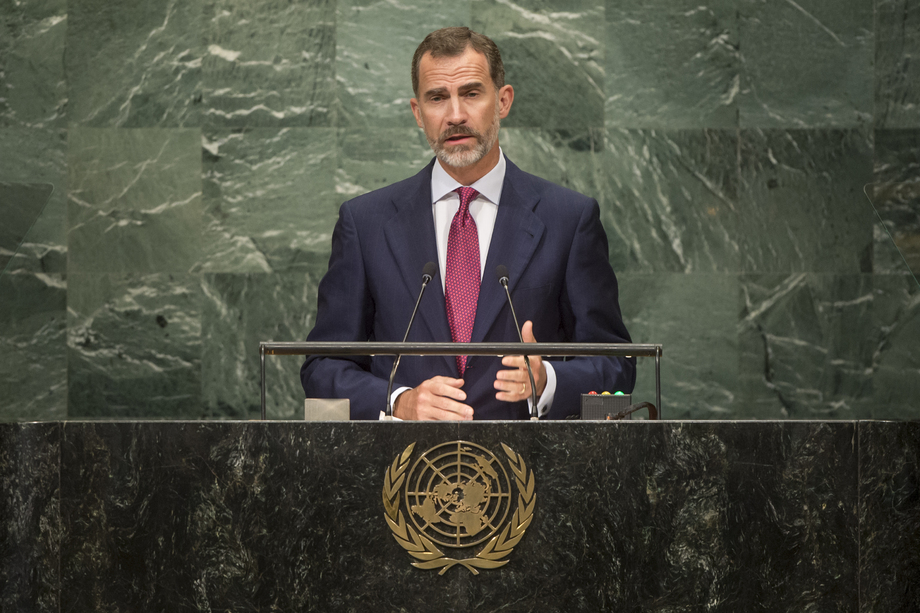 DON FELIPE VI, King of Spain, said that his country believed in the principles of the Charter, which represented hope for refugees, victims of terrorism and other vulnerable people.  It was also the source behind the 2030 Agenda, which inspired Spain’s domestic and foreign actions.  He called for economic models that would provide opportunities for all those who had suffered from the crisis in recent years.  Turning to climate change, he emphasized the importance of the Paris Agreement, the application of which was a priority for all.  The next Conference of Parties in Morocco would be an opportunity to further strengthen commitment to the Agreement.

He went on to note that 2016 represented the 400th anniversary of the death of Miguel de Cervantes, who had communicated the importance of living alongside others.  Developed democracies such as Spain often experienced complicated periods in history, such as economic problems, but overcame them through a firm belief that disputes could be resolved with respect for rules.  Such values of dialogue, commitment, duty and solidarity could turn nations into beacons of freedom throughout the world.  The 2015-16 biennium had demonstrated that his country shouldered its responsibility, met its commitments and took part in solutions to global problems.  It was approaching the final stage of its work in the Security Council with transparency, having worked on effective solutions to existing and potential conflicts.  It had taken initiatives in humanitarian affairs and promoted the role of women in conflict prevention and peacebuilding, while fighting abuses and violations against their freedom and dignity.  Spain would further work on the adoption of a resolution to ensure that non-State terrorists could not access weapons, especially those of mass destruction.

On the conflict in Syria, he said that the whole region had been destabilized, and neighbouring countries’ generosity in welcoming refugees should be recognized.  Iraq was suffering from the terrorism by Da’esh.  Spain had participated in assistance provided by the international coalition and would support Iraq in building a democratic country involving people from all ethnic and religious identities.  He continued to the matter of the United Nations Mission for the Referendum in Western Sahara (MINURSO), urging parties to resume dialogue in order to put an end to the dispute.  Spain accorded particular attention to Africa and was concerned about conflicts on the continent:  in Mali, Somalia and the Central African Republic, where Spain had a special interest.  He acknowledged the work of the African Union in maintaining peace.

The European Union was at a major crossroads, he said.  The European project was based on a common trust in the ability of its people to overcome past mistakes.  No one would gain if it were to become paralysed or fail, he added.  Spain was proud of belonging to the European Union, having both gained from it and made contributions.  It was ready to continue expanding the body in all areas.