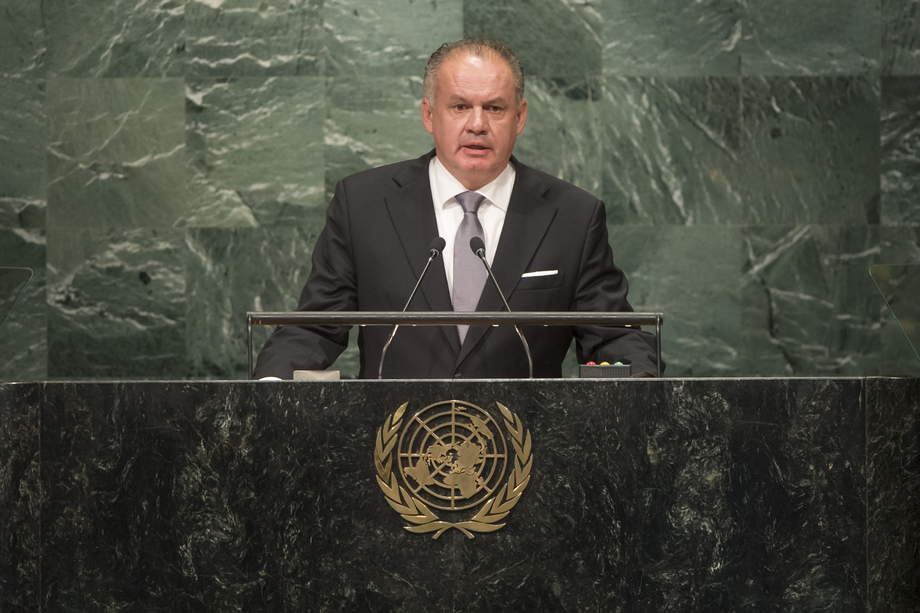 ANDREJ KISKA, President of Slovakia, said many world leaders cared more about retaining power than improving the lives of their people.  Recalling States’ commitments under the 2030 Agenda for Sustainable Development, he said that leaving no one behind was a clear way to address people’s needs.  “We are more than capable of tackling challenges of poverty, hunger and discrimination,” he said, pointing out that the international community had the best means to make the planet a better place.

He went on to emphasize that the 2030 Agenda’s implementation would not be successful without effective international cooperation supported by United Nations entities.  “We should not forget our homework — to win the hearts and minds of our people.”  With the world having become smaller due to globalization, it was the social instinct of human beings to remain local.  However, there were real dangers from the increasing threat posed by nationalism, extremism, racism and intolerance around the world.  One of the main duties of political leaders was to provide for their citizens and to ensure peace and development in their countries.

Nevertheless, the world was witnessing the most pressing global crises, he said, citing the increasing number of refugees.  “Migrants and refugees are real people,” he said, adding:  “We might have a different starting positions and experiences, but we all have to understand that refugees need our empathy and help.”  It was the moral duty of political leaders to help those running away from violence and death.  “Let’s be honest and ask ourselves:  are we all doing enough to improve the lives of people in need?”, he asked.  As terrorists continued to target millions of people around the world, “we need to stay strong in our societies”, he said.

While it was not difficult to make people fear or hate, it was essential not to judge them by their choice of worship or the colour of their skin, he said.  As the crisis in Ukraine entered its third year, Slovakia was very concerned about the destabilization of its neighbour, he said.  Stressing the importance of peaceful settlement of problems, he said the Minsk Protocol was the only viable way forward.  On the selection of the next Secretary-General, he said the process had been more consultative and open than before.  Slovakia had to be part of the process as it had its own candidate, he said, adding that Eastern Europe had much to offer in terms of capabilities, knowledge and accomplishment.