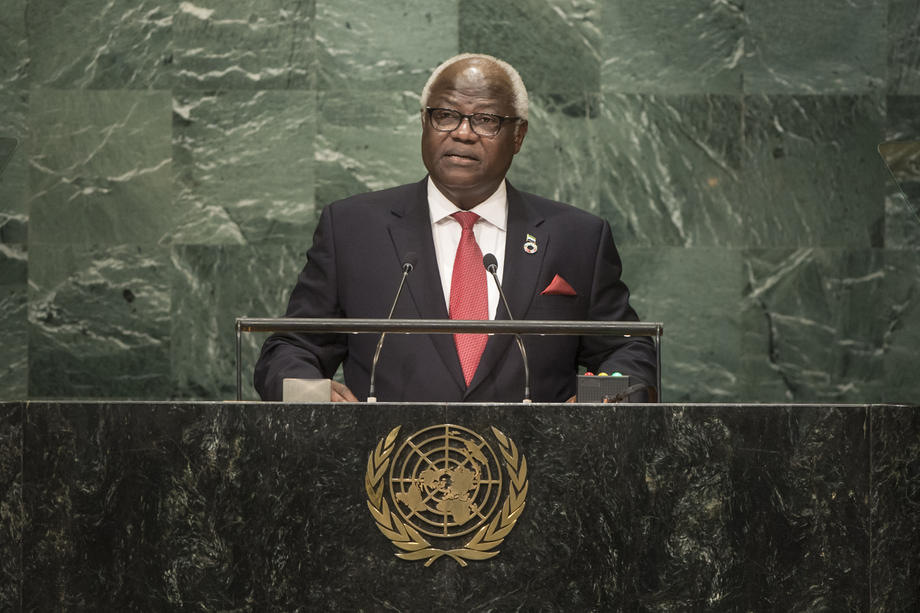 ERNEST BAI KOROMA, President of Sierra Leone, said his country had linked each of the new Goals to its national development programme, “Agenda for Prosperity”.  A national framework had been established, as had a benchmark system to address challenges relating to the data required for reporting on progress.  However, delivering on the Goals’ promise of a better world would remain elusive without reform of the United Nations.  “Let me put it straight:  our premier global institution lacks the democratic competencies to tackle the developmental, security and other challenges facing Africa and many other parts of the world,” he said.

Without African voices at the highest level of the Organization, no solutions would be sustainable, he stated.  Africa’s position was about righting historic wrongs, but more than anything, it was about Africa’s contribution to making the United Nations more effective and democratic.  Diluting any elements of that position was akin to continuing an unfair status quo.  As Coordinator of the Committee of Ten on the Reform of the United Nations, he affirmed that group’s support for the Ezulwini Consensus and Sirte Declaration, adding that he frowned at attempts to “take down our common position through divide and rule policies reminiscent of the colonial era”.

More broadly, he said, his Government was ready to deploy formed police units, special weapon and tactics units and police guards to the United Nations Standby Arrangement System.  He welcomed the adoption of Security Council resolution 2282 (2016) and Assembly resolution 70/262, both of which supported a comprehensive approach to transitional justice and an accountable security sector.  Sierra Leone was committed to good governance and would build on its post-conflict gains by strengthening its democratic institutions and access to justice. It had taken steps to improve service conditions in its justice sector and had created a legal aid board.  It was working to ensure there was no one was in correctional centres without an indictment.  Those efforts were the bedrock of its goal to become a middle-income country by 2035.

As well, legislation and policy actions had been taken to empower women and young people, he continued, noting that a record number of young people and women had been appointed to ministerial and ambassadorial posts.  The Ebola outbreak had underscored the need for more robust global health architecture.  He urged implementing recommendations by the High-Level Panel Review on the Global Response to Health Crises, adding that Sierra Leone was establishing a post-Ebola recovery programme.   While his country had contributed almost nothing to global warming, it was the third most-vulnerable country to those effects and he sought collaboration in that regard.  Concluding, he stressed that it was urgent for all parties to cooperate in the search for peace in Syria, South Sudan and Libya and speed efforts to resolve the Israel-Palestine conflict.