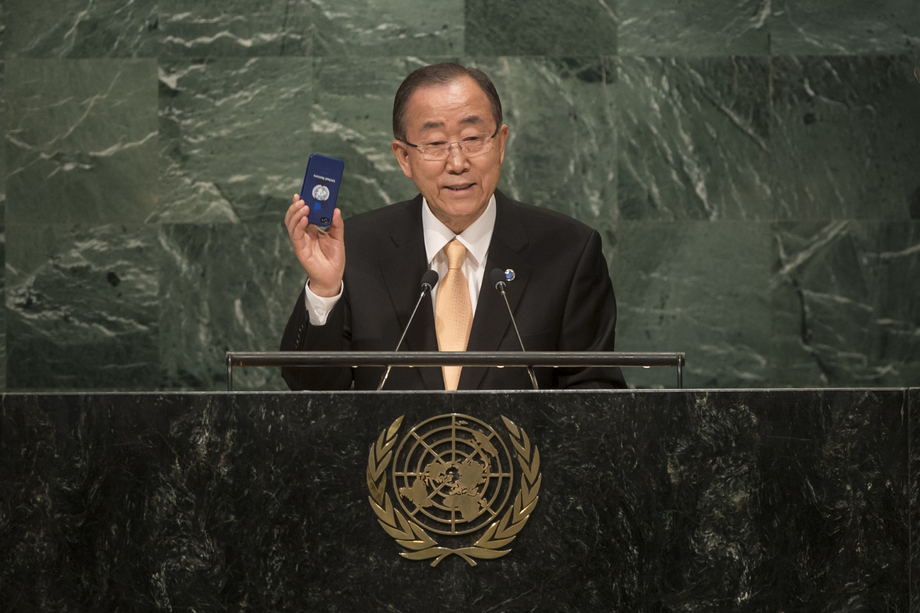 BAN KI-MOON, Secretary-General of the United Nations, recalled that, in taking the oath of office in December 2006, he had pledged to work with delegates for “We the Peoples”.  With the United Nations Charter as a guide, as well as dedicated staff, much had been have achieved, he said.  He said he also felt deep concern amid the gulfs of mistrust that had divided citizens from their leaders, extremists pushing people into camps of “us” and “them”, assailed by rising seas, and with 130 million people needing life-saving assistance.  Yet, after 10 years in office, he said, he was more convinced than ever that “we have the power to end war, poverty and persecution”.  With the Sustainable Development Goals, States had the manifesto for a better future, and with the Paris Agreement on climate change, they were tackling “the defining challenge of our time”.  He urged the Paris Agreement’s entry into force in what remained of 2016, an effort that required a mere 26 countries representing only 15 per cent of greenhouse-gas emissions.

What gains had been made were threatened by grave security threats, he continued, pointing out that conflicts had grown more protracted and that failures of governance had pushed societies over the brink.  Their tragic consequences were on brutal display from Yemen to Libya and Iraq, from Afghanistan to the Sahel and to the Lake Chad Basin.  Today, the Syrian conflict was taking the greatest number of lives and had sown the widest instability, he said, adding that there could be no military solution.  Many groups had killed innocent people, yet none more so than the Government of Syria, which continued to barrel-bomb neighbourhoods and systematically torture thousands of detainees.  Powerful patrons feeding that war machine had blood on their hands, and present in the hall today were representatives of Governments that had ignored, facilitated, funded, participated in or even planned and carried out atrocities inflicted by all sides of the Syrian conflict — against Syrian civilians.

The bar of depravity had sunk even lower with the apparently deliberate 19 September attack on a United Nations-Syrian Arab Red Crescent aid convoy, he said, adding that it had forced the Organization to suspend aid.  Stressing that accountability for such crimes was essential, he appealed to all those with influence to end the fighting and get talks started.  A political solution was long overdue.  More broadly, one year ago, Palestine had raised its flag at United Nations Headquarters, yet the prospects for a two-State solution were being lowered by the day, he said, adding that it pained him that the past decade had been 10 years lost to illegal settlement expansion, to intra-Palestinian divide and to growing polarization.

Regarding the Korean Peninsula, he said the fifth nuclear test by the Democratic People’s Republic of Korea had threatened international security, and urged that country’s Government to change course and fulfil its obligations to its own people.  In Ukraine, violence had caused internal upheaval, while in South Sudan, leaders had betrayed their people.  In too many places, leaders were rewriting constitutions, manipulating elections and taking desperate steps to cling to power, he said.  “My message to all is clear:  serve your people.”

Turning to the New York Declaration on Refugees and Migrants, adopted on 19 September, he said it pointed the way towards protection of the rights of millions of people.  “We all must meet those promises,” he said.  Cautioning against the cynical and dangerous political maths that stated “you add votes by dividing people”, he said factors that compelled people to move must also be addressed by investing in conflict prevention and engaging in diplomacy.

He also expressed regret for matters that had tarnished the reputation of the United Nations and traumatized many.  Sexual exploitation and abuse perpetrated by United Nations peacekeepers and other personnel had compounded the suffering of people already caught up in conflict and undermined the Organization’s work around the world.  “Protectors must never become predators,” he said, underlining that Member States and the Secretariat must deepen their efforts to enforce and strengthen the Organization’s zero-tolerance policy.

Regarding the cholera outbreak following the devastating 2010 Haiti earthquake, he said it had heaped misery upon misery.  “I feel tremendous regret and sorry for Haitians affected by cholera,” he added, stressing that the time had come for a new approach to easing their plight.  “This is our firm and enduring moral responsibility.”  A package of material assistance was being prepared for those most affected, and the United Nations was working to build sound water and health systems, an effort that could not succeed without sustained support by Member States.  “Let us work together to meet our obligations to the Haitian people.”

He went on to say that he was proud that the United Nations Entity for Gender Equality and the Empowerment of Women (UN-Women) had come to life during his tenure and that he had appointed more women to senior positions than ever before.  Far more must be done to end violence against women and ensure that every girl had the start in life that she deserved.  The Organization had also deepened support for the “responsibility to protect”, while landmark convictions by the International Criminal Court had advanced accountability.  Civil society had been essential in all those efforts.

Calling for building upon a decade of progress in education and health, he noted that polio was almost eradicated, more mothers now survived childbirth and more children were in school.  The collective response to the Ebola outbreak had prepared the world for future health emergencies.  He also called for building upon recent momentum in order to move closer to the elimination of nuclear weapons.

The United Nations was tapping the energies of young people as never before, he said, including with the appointment of the first United Nations Special Envoy on Youth and a new Special Envoy on Youth Employment.  The Organization was working with the private sector to push for responsible practices that would harness the best of business.  Continued progress would require new heights of solidarity, he said.

Pointing out that States had not agreed on a formula for reforming the Security Council, he said that, in the same spirit, he had put on the table a major reform to improve fairness and effectiveness in the United Nations, having too often seen proposals blocked in the name of consensus, sometimes by a single country.  Essential action and good ideas had been blocked in the Security Council, the Assembly, the budget process and elsewhere, he said, asking whether it was fair for any one country to wield such disproportionate power and hold the world hostage over so many important issues.

“Consensus should not be confused with unanimity,” he said, proposing that the Assembly President explore the creation of a high-level panel to search for solutions.  States must also respect the independence of the Secretariat.  When United Nations reports “say what needs to be said”, Member States should not try to rewrite history.  When human rights personnel acted on behalf of the most vulnerable, States should not block their path, and when envoys raised difficult issues, States should not threaten to banish them.  “We must all be open and accountable to the people we serve,” he said.  While a perfect world might be on the far horizon, the route to a better world was in each person, he said.  “I know that together, united, we can get there.