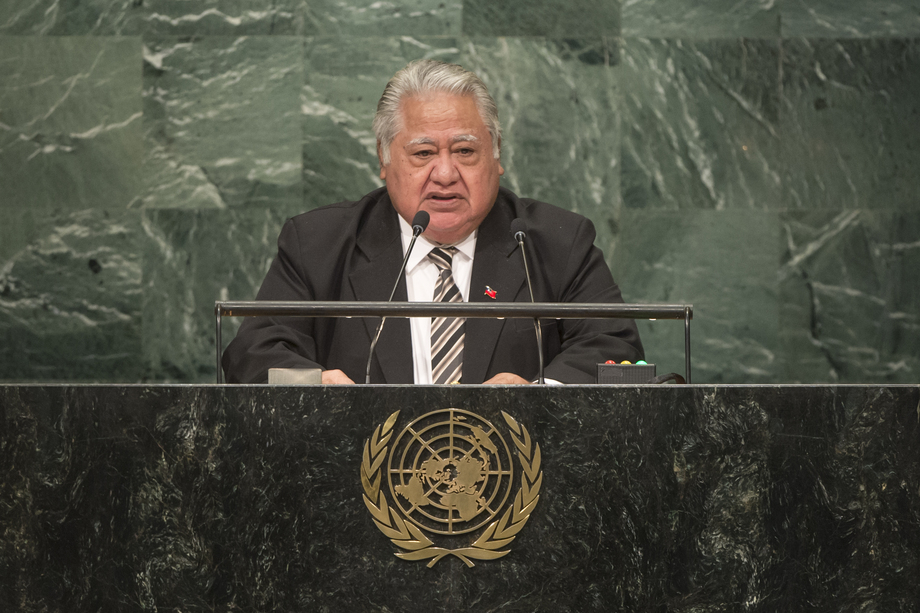 TUILAEPA SAILELE MALIELEGAOI, Prime Minister of Samoa, thanked the Secretary-General for having made climate change a priority for the Organization during his tenure, and expressed hope that his successor would continue his legacy.  While encouraged by the adoption of the Paris Agreement, he emphasized that delivering on its promises and making good on its commitments was “the seal of true leadership”.  The challenge remaining for the Green Climate Fund and other funding institutions was to help small island developing States access their resources.

Partnerships would be crucial in that endeavour, he said, expressing hope that all development partners, as well as United Nations entities would actively engage the SIDS Partnership Framework — a platform for monitoring the full implementation of pledges and commitments through partnerships.  He stressed the importance of protecting oceans, which were critical to the economic survival of small island developing States, and indeed, to global prosperity more generally.  That vital resource was under threat from overfishing, climate change, ocean acidification, loss of habitat and pollution.

Concerning the mass migration of people fleeing war and terrorism, he stressed the need for a collective response that should begin with the Security Council.  He called upon the Council to address the threat posed by the Democratic People’s Republic of Korea to the peace and stability of the Asia-Pacific region.   On the issue of Security Council reform, he said it was time for an enlarged Council — the membership of which would reflect contemporary geopolitical realities.  It was also important that more democratic and transparent processes and procedures be put in place to govern the Council, and that it engage more effectively with the General Assembly.  Finally, he pledged Samoa’s continuing commitment to provide civilian policemen and women for United Nations peacekeeping operations around the world.