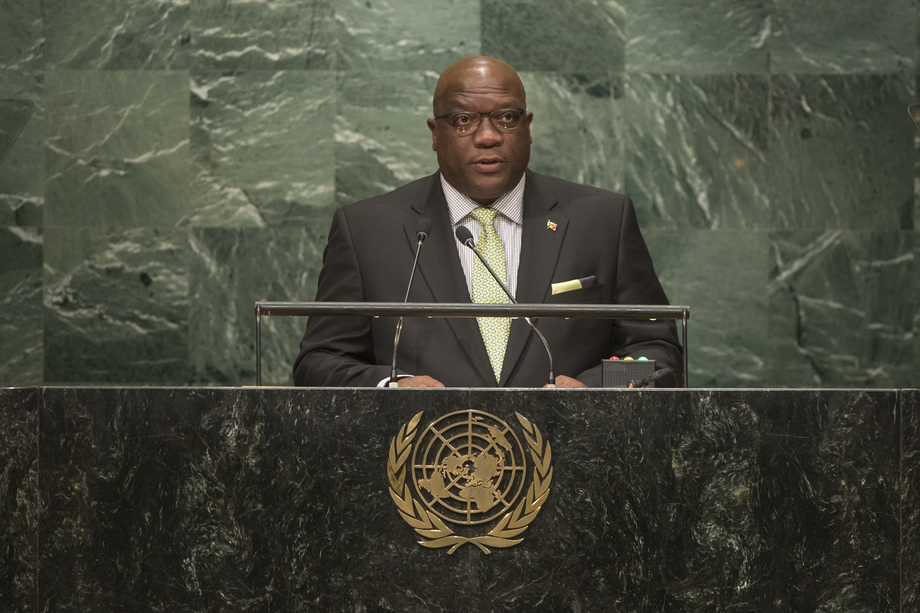 TIMOTHY S. HARRIS, Prime Minister of Saint Kitts and Nevis, said many global problems stemmed from years of social neglect and economic inequalities.  Solving them would require greater partnership and finding common ground.  Critical to transforming the world was the empowerment of young people, and significant intervention would be required to feed their sense of leadership and civic responsibility.  Saint Kitts and Nevis had focused on job creation, skills enhancement, entrepreneurship and support for teen mothers.  Small arms and light weapons had also had devastating effects on young lives, and while the Government had ratified the Arms Trade Treaty, it needed support, he said.

Indeed, given the country’s small size, one climate event could wreak havoc on every aspect of life, he said, calling for a strategy to promote climate financing.  “It means nothing to say that billions of dollars are available for climate financing if the mechanisms for accessing them are opaque, prohibitive and extremely difficult to penetrate,” he pointed out, urging “common sense cooperation”.  Small islands were also being marginalized in the global financial system, he said, noting that 16 banks across five countries had lost all or some of their correspondent banking relationships in the first half of 2016, placing their financial lifelines at great risk.

Urging the Group of Seven, the Group of 20 and international financial bodies to re-evaluate how and whether a country qualified for concessional support, he said that the arbitrary classification of some small States as middle-income countries could never make sense when one could grow at 4 to 6 per cent one year only to see nearly 100 per cent of its gross domestic product (GDP) wiped out by a tropical storm.  Noting the high prevalence of HIV/AIDS in the Caribbean, he called for lower treatment costs for non-communicable diseases.  Saint Kitts and Nevis had forged durable partnerships that had been integral to its efforts to modernize its economy, he said, adding that Cuba’s support in the areas of education and training, health care, agriculture and heritage development had dwarfed the assistance provided by many advanced economies.  Support from Taiwan had also been remarkable, he said, welcoming new opportunities for that country’s integration into the international community.  He also decried the nuclear tests carried out by the Democratic People’s Republic of Korea, in violation of Security Council resolution 2270 (2016).