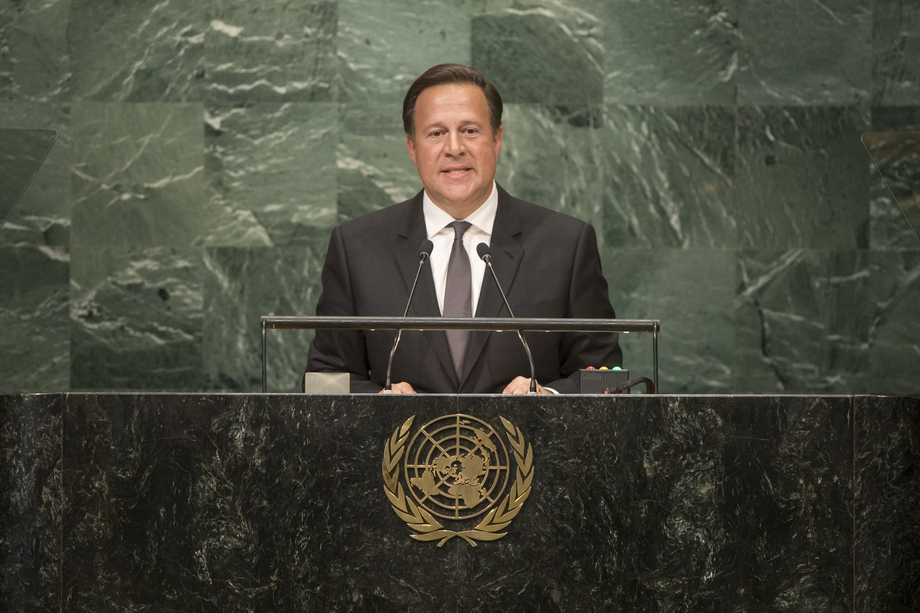 JUAN CARLOS VARELA RODRÍGUEZ, President of Panama, said that his country was one of dialogue; a multi-ethnic, multicultural and peace-loving nation.  He highlighted the completion on 26 June 2016 of the expansion of the Panama Canal, which would now have a capacity for dramatically more cargo than before, benefiting global trade.  Panama, he said, was a “bridge across the world”.

The Government’s strategic plan 2014-2019 was in sync with the 2030 Agenda, he continued.  His nation’s plan featured a public investment plan of $19 billion to provide every Panamanian with access to safe drinking water, sanitation, housing, health care, security and transportation.  In education, by the means of the private sector, the Government had allocated funds needed to develop an educational model with 100 per cent secondary school coverage together with bilingual education and the building of new and modern technical higher education.  The Government was building 10,000 new classrooms and renovating more than 3,000 public schools nationwide.  With support of $3 billion in foreign investment in energy, Panama was diversifying its energy sources with more clean energy.  It was also expanding its transportation systems.

Highlighting the pressing importance of irregular migration flows, he spoke of the 19 September United Nations high-level event on migration.  “All migration policies and measures to be adopted will have to be based on the protection of the principle human right, which is the right to life,” he said.  Panama reaffirmed its commitment to providing humanitarian treatment to migrants, and appealed to all countries in the hemisphere to do the same.  In Panama’s region that particularly applied to Haitian migrants, and he also expressed hope that improved relations between Cuba and the United States would lead to solutions to migrant flows, as well as to other areas.

The issue of production and trafficking of drugs threatened the region, he said.  Panama continued to strengthen its capabilities to protect its national territory, and “27 months of this activity has led to a decrease of more than 40 per cent of this delinquency,” he said.  Panama was also recently designated as the host for the next World Day of Youth in 2019, an event which would bring together more than half a million young people.  “This could be a great opportunity to sow a seed of peace for youth in Central America,” he said.