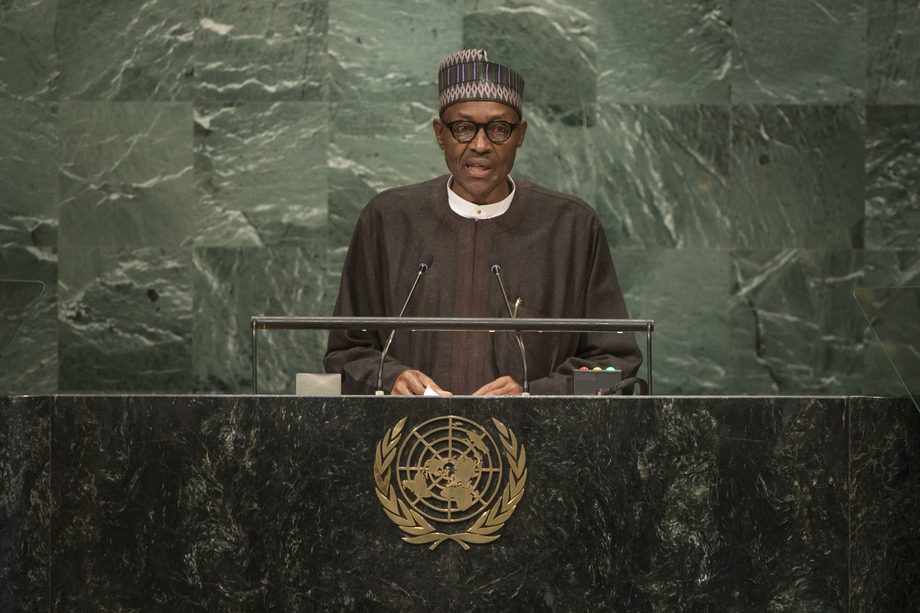 MUHAMMADU BUHARI, President of Nigeria, noted that although his country had been adversely affected by the global economic downturn, it had embarked on reforms aimed at diversifying its economy and creating an environment conducive to foreign direct investment.  He said that fighting corruption remained important to his Administration and the campaign had yielded positive results, including the recovery of stolen assets.  The recovered funds were being channelled to the development of critical infrastructure and the implementation of social inclusion programmes.  Nigeria supported the development of an international legal framework to enforce anti-corruption measures and strengthen existing international institutions to deal with corrupt practices, he said, calling upon all Member States to sign up to the United Nations Convention against Corruption.

He said his country was also committed to the Extractive Industries Transparency Initiative, a coalition promoting accountability in managing revenues from oil, gas and solid minerals, because transparent governance was imperative for resource-rich developing countries such as Nigeria.  Turning to climate change, he emphasized the importance of the Paris Agreement and said his country would continue its efforts to reduce greenhouse gas emissions, foster a low-carbon economy and build a climate-resilient society.  Climate change had resulted in the drying up of Lake Chad, which threatened the livelihoods of an estimated 30 million people across the region.  Replenishing the lake would cost $14 billion under a five-year plan that deserved global attention, he said.

Regarding the rising threat of violent extremism, he noted that the United States had just marked the fifteenth anniversary of the 11 September 2001 attacks.  While urging justice for the families of the victims, he also urged the international community to avoid reacting to such actions by taking unilateral measures that would have a negative or disruptive effect on collective efforts to fight terrorism.  Nigeria had made progress in its battle to defeat Boko Haram, having limited its operations to the sporadic use of improvised explosive devices against “soft targets”.  He commended the participation of neighbouring countries in a multinational joint task force, the efforts of which had restored normality to areas previously occupied by Boko Haram.

Thanking international partners, he went on to say that the experience was evidence that, with international collaboration, terrorism could be defeated.  Expressing particular concern about the plight of persons internally displaced by Boko Haram terrorism, he said Nigeria had taken concrete steps to ensure that their humanitarian needs were met and their return voluntary.  Thanking all agencies and partners deployed in north-eastern Nigeria, he reaffirmed his country’s commitment to an effective global response in addressing the root causes of worldwide refugee flows.  Finally, he called for reform of the United Nations Security Council, with representation from Africa among the permanent membership.  Nigeria stood ready to serve Africa and the world in that regard.