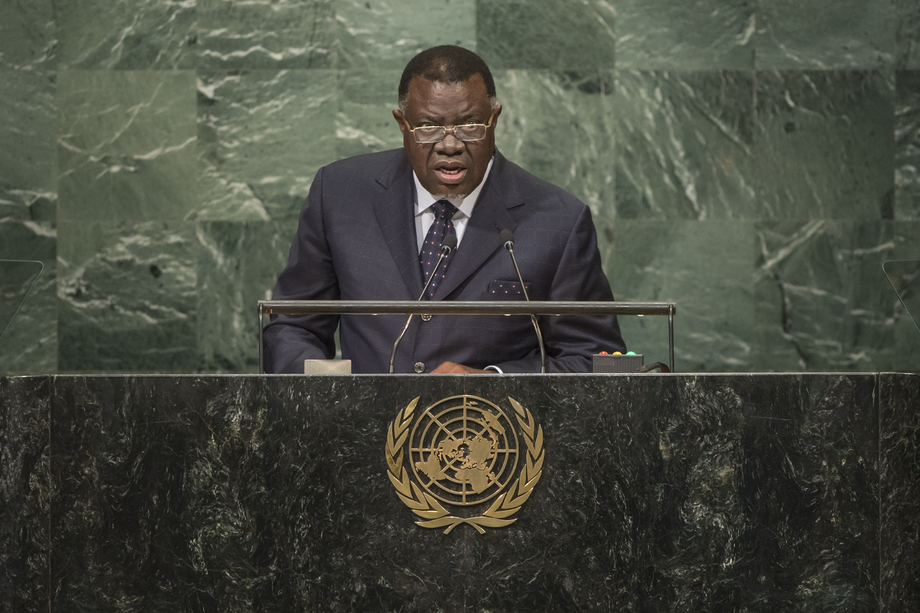 HAGE G. GEINGOB, President of Namibia, said the world’s people had implored the United Nations to increase its efforts in more spheres of activity, locations and challenging circumstances than in the Organization’s history.  Implementation of the new 2030 Agenda would require coherence and complementarity among global, continental, regional, national, local and other platforms.  In addition, the success of the Sustainable Development Goals would require efforts to integrate economic growth, social justice and environmental stewardship.  “We need to talk now about inclusive growth that would translate to decent jobs for our citizens,” he said, urging a shift away from the current growth models.

To make a dent on poverty, Namibia had to grow at a higher level, he said, stressing his country’s commitment to responsibly managing the economy.  There was no risk it would not honour its near- and medium-term debt obligations.  The private sector had a crucial role to play in stimulating growth.  On the social justice front, he expressed concern about the current refugee crisis, which required immediate and collective action.  Notably, factors that forced people to flee needed to be addressed, rather than just addressing the symptoms of the problem.

Today, Namibia had ratified the Paris Agreement on climate change, he said, stressing that the United Nations Framework Convention on Climate Change and the Sendai Declaration on Disaster Risk Reduction were the central frameworks for cooperative action in that regard.  Among the world’s driest countries, Namibia had taken mitigation and adaptation measures to staunch losses due to climate change, including through the development of solar, wind and hydroelectricity.  He emphasized his support for the principle of common but differentiated responsibilities in that regard, adding that Namibia also had offered to host the African regional hub of the Green Climate Fund.

Turning to the United Nations, he said the Security Council was too important an organ to be left to the interests of a few and he called for its reform to make it more democratic and transparent.  Namibia was committed to the African common position from a belief that the Council should reflect the United Nations’ diversity.  “Fairness and justice warrant that Africa be part of the equation,” he said, also calling for implementation of all relevant resolutions on Palestine and urging support for Palestinians to exercise their right to self-determination.  Recalling Morocco’s support in helping Namibia achieve independence, he urged implementation of all resolutions calling for a referendum on Western Sahara so that people there could freely express themselves.