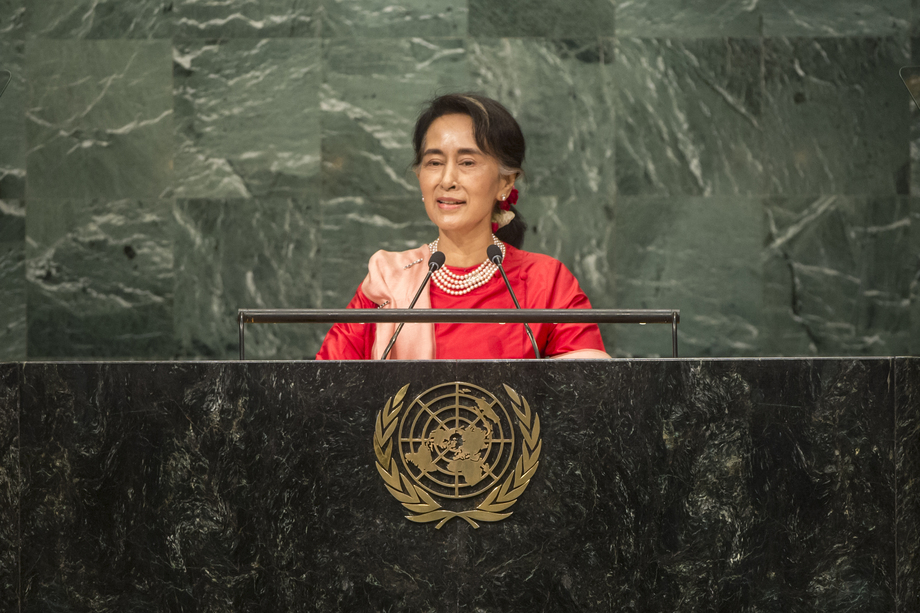 AUNG SAN SUU KYI, State Counsellor and Minister for Foreign Affairs of Myanmar, said that “now, once again, it is a time of determined hope” for her country, adding:  “The only path that will lead us to our gaols is the path of peace, the path that we must follow with hope and determination.”  The people of Myanmar had long been deprived of their inherent right to live peacefully.  For a country that had experienced over six decades of internal armed conflict, nothing was more important than the achievement of a lasting peace and national reconciliation.

Acknowledging that over the last few years, the world had focused its attention on the situation in Rakhine State, she stressed that “we do not fear international scrutiny”, and underscored that Myanmar was committed to finding a holistic approach peace.  To boost those efforts, her Government had established the Advisory Commission in Rakhine State, which focused on humanitarian, development, basic rights and security issues.  While there had been persistent opposition from some, Myanmar would remain determined to achieving peace and prosperity in that part of the country “by standing firm against the forces of prejudice and intolerance”.

While talking about building peace and development, the core principles of human rights and respecting diversity could not be ignored, she went on to say.  Migrant workers had and would continue to contribute to their host countries.  “Our planet is a place to be shared by all,” she said, adding that a lack of purpose and a sense of direction in life could drive many into the snares of radical ideology that offered a sense of certainty.  She emphasized the need to establish a nuclear-free world.  “I have seen too much anger and hatred,” she said.  There was now a need to create and uphold a world of giving rather than demanding.  “Where, but in this gathering of nations, can I make such an appeal to stand up against anger, hatred and fear?”, she asked the General Assembly.