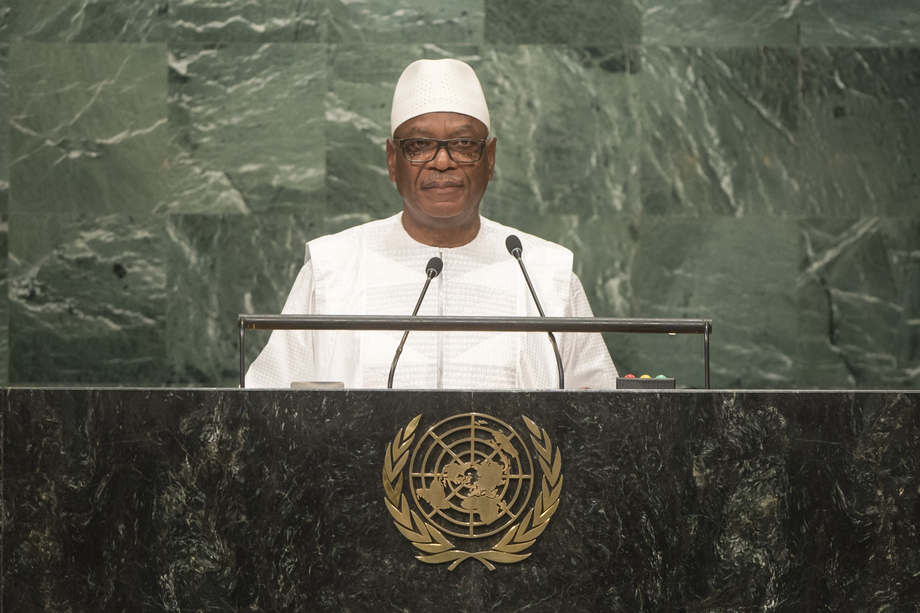 IBRAHIM BOUBACAR KEITA, President of Mali, noted that peace and security were essential for development.  Fifteen months after the peace agreement in Mali was signed, hostilities had effectively ceased between the Government and signatory groups, and significant progress had been made.  The effective application of Security Council resolution 2295 (2016), renewing the mandate of MINUSMA, would allow for the progressive recovery by the Government of sovereignty throughout Malian territory.  Implementation of the peace agreement required mobilization of outside resources so as to support national efforts, and Mali thanked its international partners.

The peace agreement faced serious challenges linked to the activities of terrorist groups in the north and asymmetric attacks on civilians and peacekeeping forces, he continued.  It was necessary to increase the process of cantonment and disarmament, demobilization and reintegration so as to isolate armed groups that had not signed the agreement and those affiliated with terrorist networks.  The Government was ready to fully undertake its responsibility for the new mandate and work with MINUSMA.  He welcomed the high-level meeting on Mali that had taken place that morning between all stakeholders, where his country spoke of the urgency of accelerating implementation of the peace agreement.  The people and Government of Mali were grateful for the United Nations support of the peace process.  No country in the world was free of terrorism and no cause could justify violence against civilians.  Mali encouraged international cooperation between Member States to neutralize the hydra of terrorism and its networks.

The timing of the General Assembly session, one year into 2030 Agenda, allowed Member States to take stock to see how to find the best ways and means to ensure the achievement of the Sustainable Development Goals, he said.  Mali was convinced of the need to adopt strategies to strengthen economic growth and respond to the needs of populations.  That meant protecting the environment and providing education, health care, social protection, employment for youth and women’s empowerment.

Climate change was a major challenge that affected all humanity, in particular the countries of the Sahel.  He welcomed the Paris Agreement and announced that Mali had today deposited its instruments of ratification for the Agreement.