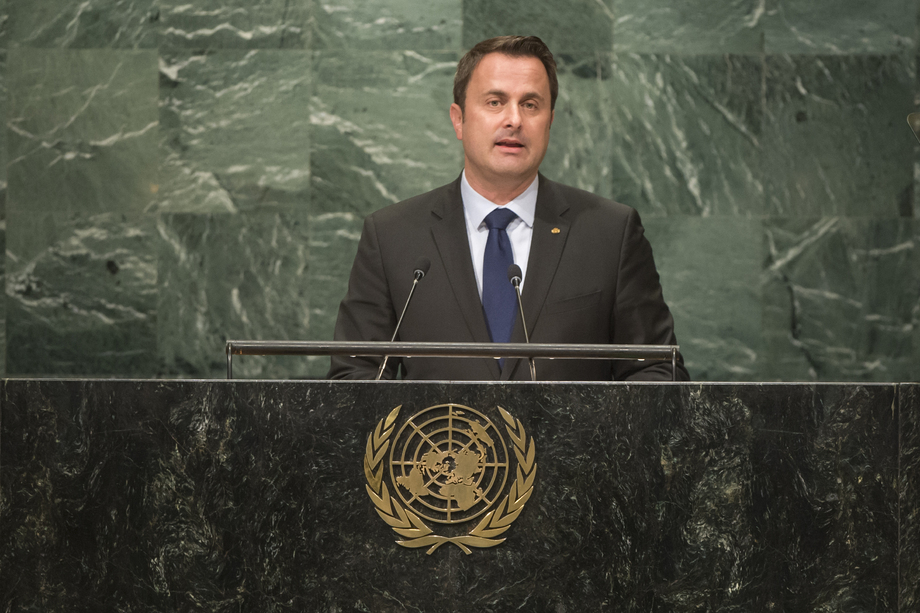 XAVIER BETTEL, Prime Minister of Luxembourg, said that, during his country’s 2015 European Union presidency, he had learned the vital importance of solidarity and burden-sharing, a credible migration policy, border control and respect for the Dublin Rules.  Indeed, it was important to distinguish between refugees and irregular migrants.  While many refugees had fled violence, much of the migration to Europe was economic in nature.  “We can’t despise those who, for themselves or their loved ones, have embarked on a long and dangerous journey,” he said.  “We can’t fail to welcome them, but it is difficult to welcome them all.”  Populism only led to an uncontrolled situation, he said, condemning suggestions that each refugee could be a terrorist.  Refugees were victims, not perpetrators of terrorism.

Conflict, arms proliferation, violent extremism, terrorism and climate change threats still persisted, he said.  While Africa was particularly vulnerable to internal and external challenges, countries could work together to ensure peace in South Sudan, Libya and the Central African Republic, he said, pressing the parties to those conflicts parties to lay the basis for sustainable development.  Africa had major potential, in its young people, first and foremost, which made education and job creation important priorities in national development programmes.  The United Nations often acted too late to prevent crises, but the Assembly’s adoption of regulations to bring about peace marked an important change, placing conflict prevention at the heart of United Nations action.

Turning to Syria, he said the country’s Government had perpetrated atrocities, while Da’esh and other groups flourished from the war economy and external support.  A generation of children had been traumatized, deprived of protection and education, he said, calling for perpetrators of war crimes and crimes against humanity to be brought to justice, including before the International Criminal Court.  Regarding the Israeli-Palestinian conflict, he said that a two-State solution was the only way to resolve it, adding that he supported the convening of an international conference to help the parties reach a settlement.  On Iran, he urged vigilance in implementing the Joint Comprehensive Plan of Action.  Regarding the Korean Peninsula, he urged a resumption of negotiations to bring about verifiable denuclearization.