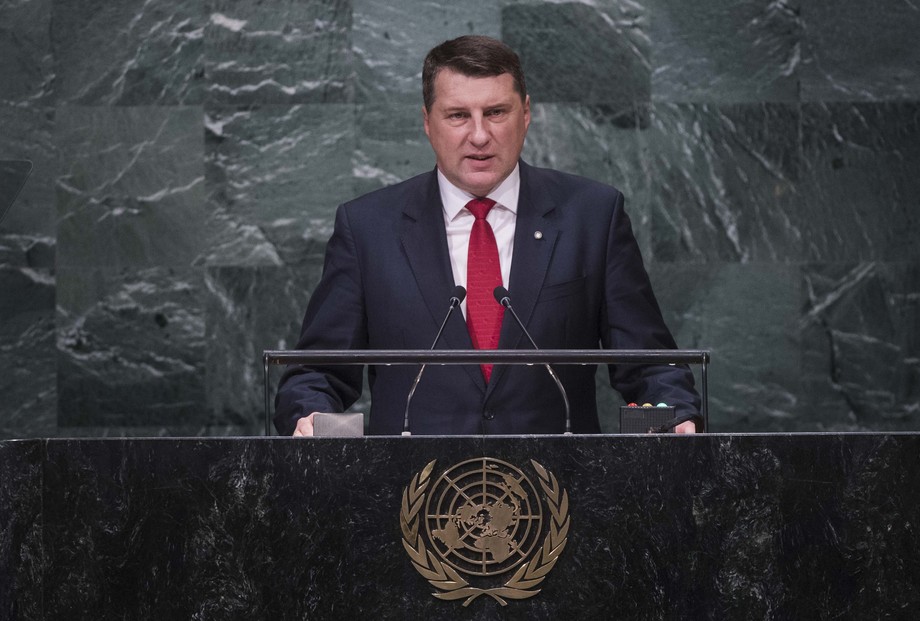 RAIMONDS VEJONIS, President of Latvia, said the migration crisis could not be addressed by the most affected countries alone.  It would require joint efforts and shared responsibility.  While military and security measures were necessary to combat Da’esh and similar groups, it was critical to address the root causes that drove people to turn to violence.  “We need to think of novel ways to prevent extremism and radicalization,” he said, calling for an international plan to build resilience in communities that for years had suffered the barbaric rule of Da’esh.  In the same vein, local populations must have the power to shape their future based on rule of law and human rights.  They must also work to counter extremism and terrorism.

Security challenges in the Middle East were marked by a high degree of complexity, spill-overs and refugee flows, he continued, stressing that the attacks in Syria against civilians, medical facilities and schools were unacceptable.  A nationwide ceasefire and improved humanitarian access were a prerequisite for the resumption of talks.  In Libya, an institutional vacuum had created a breeding ground for terrorist groups; cohesion between rival parties was critical to long-term stability.  He commended Iran’s cooperation with the Atomic Energy Agency.  However, North Korea’s repeated nuclear tests undermined global security.  As well, there was no alternative to the two-State solution in the Middle East and long-term stability in Afghanistan was critical for global and regional security.

It was a “very turbulent time” in Europe’s security landscape, he said, emphasizing that various protracted conflicts should remain high on the international agenda.  The Russian Federation had undermined the foundations of international law by changing borders of sovereign States through the use of force.  Latvia would continue to stand for the sovereignty and territorial integrity of Ukraine, he said, calling for an end to the illegal annexation of Crimea by the Russian Federation.  His country would also continue to support Ukraine in its reform process and humanitarian needs.

The United Nations capacity to address global challenges depended on the political will to move forward with Security Council reform, he said, expressing support for several initiatives including the Council’s Code of Conduct against genocide, crimes against humanity and war crimes.  Addressing the issue of climate change, he said Latvia would “strive” to ratify the Agreement as soon as possible.  Achieving the 2030 Agenda would not be easy but it clearly outlined a better world worth reaching for.