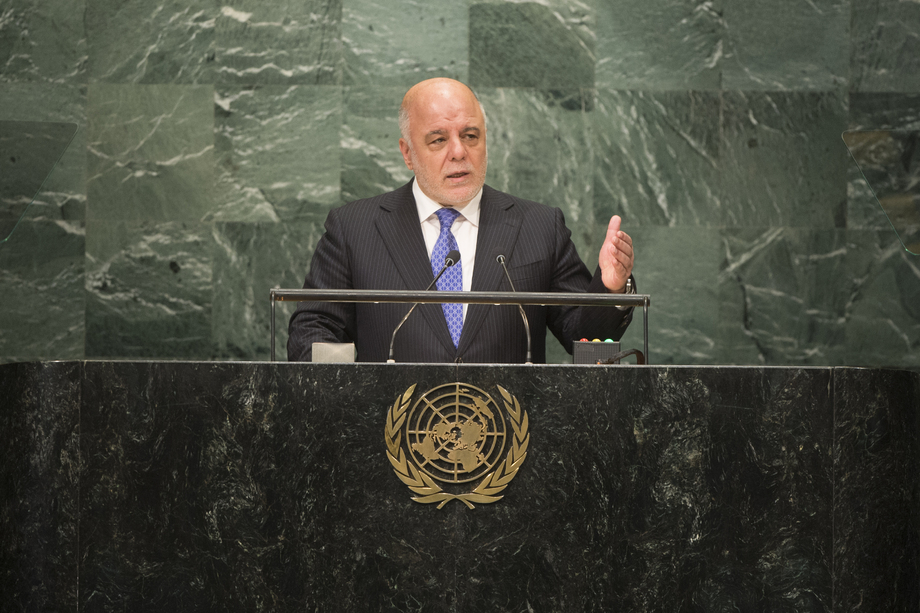 HAIDER AL-ABADI, Prime Minister of Iraq, said he looked forward to the day when his country, and the entire Middle East, would be free of Islamic State in Iraq and the Levant (ISIL/Da’esh).  Although his country had recently made great progress in fighting that terrorist organization, the international community must come together to once and for all end terrorism.  “We deem any victory achieved against Da’esh anywhere in the world as a global triumph,” he said, adding that the terrorist organization was “literally an adversary to Islam, rather than other convictions”.

He commended Member States for their support to Iraq in attaining security and stability.  Through that support, Iraq had been able to implement programs for the return of internally displaced people, including water, electricity, educational and medical services.  He called on the global community to maintain their aid for internally displaced Iraqis, especially with regard to the upcoming planned liberation of Nineveh.  In a further appeal, he asked the international community to demand Turkey to withdraw its forces from Iraqi territory.  Turkish forces were not welcomed by Iraqi citizens and would hinder the Government’s efforts to liberate Nineveh from ISIL.

Weakening economic and social growth had also gravely destabilized Iraq, he said.  The main trigger was the collapse in global oil prices, in addition to the sharp rise in military and security expenditures that had negatively impacted development, investment and infrastructure programs.  Large reforms, he underlined, “would not be less difficult and dangerous than tackling terrorism”.  Nonetheless, the Government had initiated the restructuring of many State institutions, prioritizing citizen services, streamlining procedures and removing obstacles to investment.  In addition, it was strengthening partnerships with the private sector.