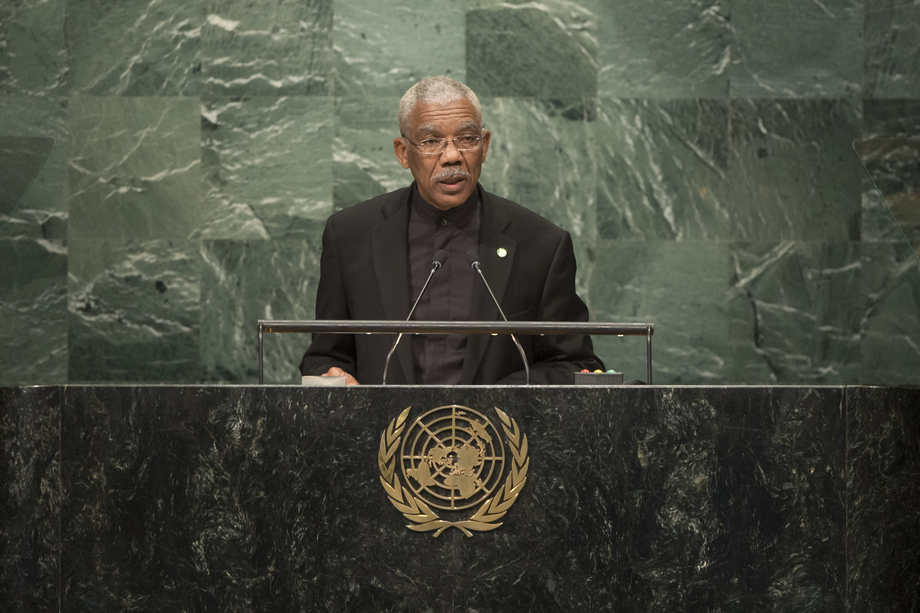 DAVID ARTHUR GRANGER, President of Guyana, said his country was pursuing a secure future for its people through a green economy, and was proud to be a reliable partner in international efforts to realize the Sustainable Development Goals.  Noting that his country played an important part in climate-change efforts as part of the Guyana Shield rainforest system, he said more than 85 per cent of its land mass was covered by a green canopy.  Agreements had been signed recently on preserving its status as a carbon sink and home to a rich biodiversity.  He pledged expanded research facilities for both rainforest conservation and biodiversity issues.

Laying out other initiatives to reduce greenhouse-gas emissions and foster low-carbon growth, he said, however, that all Guyana’s efforts for sustainable development in an environment of peace were challenged by the territorial ambitions of its neighbour, Venezuela.  As Guyana celebrated its fiftieth anniversary of independence, Venezuela reasserted its repudiation of a border treaty it had signed more than 117 years ago and had respected for 60 of those years.  He recalled that, during the 2015 general debate, he had warned of Venezuela’s threat to Guyana’s sovereignty and territorial integrity, as well as to peace and security in the region.  Since then, Venezuela had thwarted all the Secretary-General’s efforts to pursue a resolution of the controversy.

As a small State, Guyana relied on the United Nations for protection against threats to its security, he continued, describing Venezuela’s as a threat to Guyana’s existence.  “They are a scandalous revival of the conquistadorial disease,” he added, while expressing sympathy for Venezuela’s people as they faced internal problems.  He urged the international community to reaffirm its support for Guyana and its efforts to become a green State.  In the context of national sovereignty and sustainable development, he also reiterated support for the complete lifting of the United States blockade against Cuba.