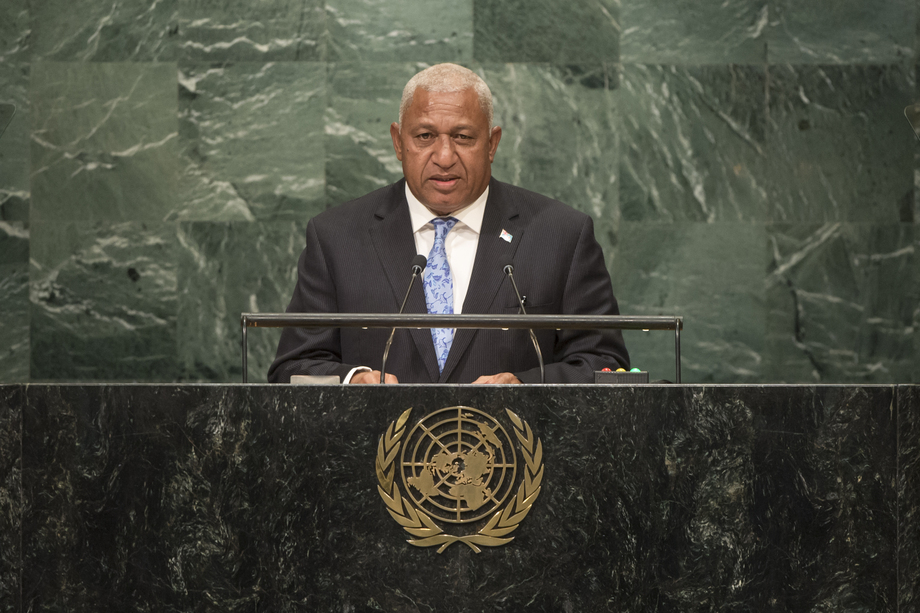 JOSAIA VOREQE BAINIMARAMA, Prime Minister of Fiji, said that Cyclone Winston, packing winds of more than 300 kilometres per hour, killed 44 people and left many thousands homeless.  It had, however, spared the tourism areas, which was Fiji’s main source of income.  “But, if this is what awaits us as global warming triggers weather events that are more frequent and more extreme, then God help us,” he stated.  Small island developing States faced a nightmare scenario in which a single event could wipe out economies and set them back for decades.

“Our message from the Pacific is this:  the 2°C cap is not enough,” he said, urging Member States to “go one better” and embrace the 1.5°C cap.  Ratifying the Paris Agreement would be “a first step” towards that goal.  Meanwhile, Fiji would be implementing the 2030 Agenda and had even adopted a plan that stipulates that “no development whatsoever in Fiji will be permitted unless it can be conclusively demonstrated to be sustainable”.

Apart from focusing on making quality products and developing infrastructure, Fiji was also focusing on equipping its young people with skills to sustain livelihoods and contribute to nation’s progress.  “We have set our sights higher than ever before:  to become a smarter, more dynamic country at the hub of the Pacific,” he said, adding that Fiji was currently experiencing a record period of economic growth that included seven straight years of expansion.  Whatever the challenges of Cyclone Winston, Fiji would remain confident to forge ahead with its many goals, including placing trade at the centre of its foreign policy efforts.