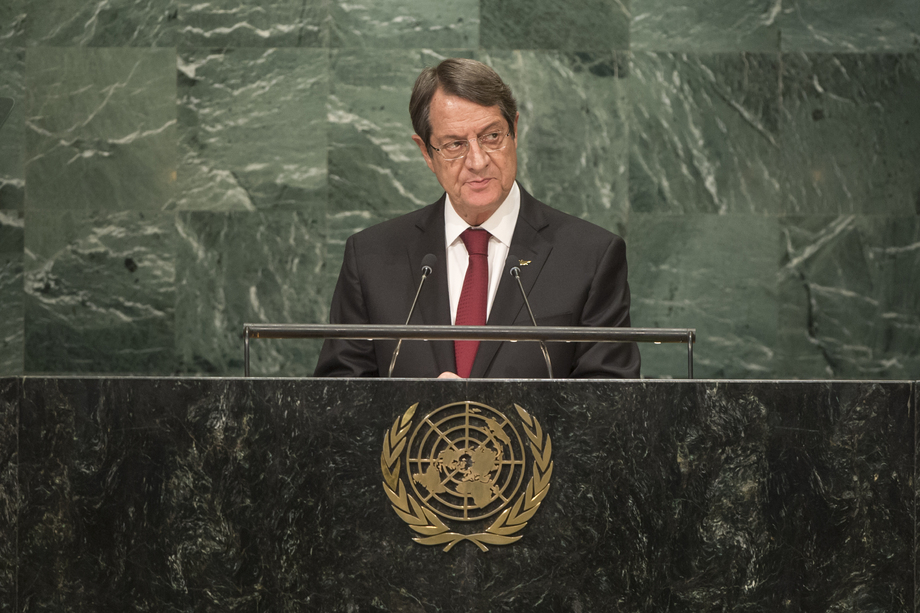 NICOS ANASTASIADES, President of Cyprus, said that in order to address the root causes of the refugee and migration crisis, international efforts needed to be directed towards making sustainable development a reality for all countries — a goal that could only be achieved if the international community adopted a targeted and results-based approach to development cooperation.  Also required were efforts to eliminate inequality and social exclusion, address gender inequality and invest in human capital, especially girls’ education.  The threats posed by ongoing conflicts and the prevention of future ones needed to be confronted, as well.  Therefore, it was important for the international community to reconsider conflict resolution mechanisms, he said, calling for strengthening support for the United Nations.

In that regard, he thanked the Secretary-General for his efforts to resolve the Cyprus Problem, which was the second longest-standing unresolved international issue on the United Nations agenda.  It was regrettable that numerous rounds of talks had not been successful.  Nonetheless, he expressed his hope that the latest round of negotiations would end the “unacceptable status quo”.  Progress had been made on certain key aspects, but differences remained on a number of issues, the most important being property, territory and security and guarantees.  Those issues would weight significantly on whether a solution would be possible in the near future.

If the failures of the past were to be avoided, he continued, key issues would need to be addressed, including, among others, the financial dimension of the settlement that tackled property issue and the institutional functioning of the federal State; safeguards for the smooth implementation of the agreement; details regarding what the first day of the solution would entail; the introduction of the euro as legal tender on the first day of the settlement; and ensuring the speedy implementation of the various aspects of the agreement.

He said that he believed a solution by the end of the year was achievable, provided that all interested parties show the same degree of commitment, voicing hope that a solution to the Cyprus Problem would “offer a beacon of hope” that even the most intractable problems can be solved peacefully through the United Nations.