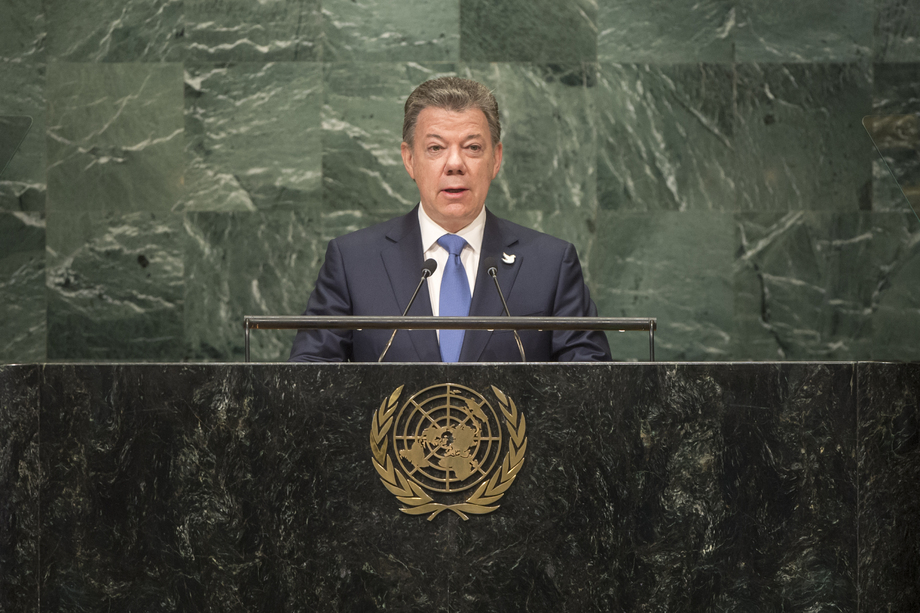 JUAN MANUEL SANTOS CALDERÓN, President of Colombia, announced that the Agreement for the Termination of the Conflict would be officially signed in Cartagena de Indias on 26 September and approved by the plebiscite on 2 October.  Noting that the announcement was occurring on the International Day of Peace, he pointed out that, with the agreement, the oldest armed conflict in the Western hemisphere would come to an end.  The accord marked the first time that a Government and an illegal armed group had agreed to a resolution through a system of transitional justice and not through external imposition.  The agreement meant that the Revolutionary Armed Forces of Colombia — People’s Army (FARC-EP) would become a political movement in the country, with greater guarantees to the opposition.

In addition to the benefits peace would bring to Colombia’s people and its democracy, he also noted that it was an important step forward for its environment and for ending drug trafficking.  Those who once protected illicit coca crops would now work together with the State for their eradication, and land, once deforested for coca plantations, would be regenerated.  Waterways would no longer be polluted by millions of barrels of oil resulting from attacks on infrastructure.  “We will be able to better take care of and preserve the natural lung that is the Amazon,” he declared.

He went on to thank the international community for its support for peace, in particular Cuba, which hosted the dialogues, and Norway, which was guarantor of the peace negotiations.  He also thanked Chile, Venezuela, the United States, Germany, the European Union and the Secretary-General for their support.

Finally, he expressed his solidarity with other nations that were suffering from global terrorism, voicing his wish that the attainment of peace in Colombia after more than five decades would give them hope.  He called for the international community to take in and protect the victims of war, and pledged his country’s continued support for the Organization’s reason for being:  achieving world peace.