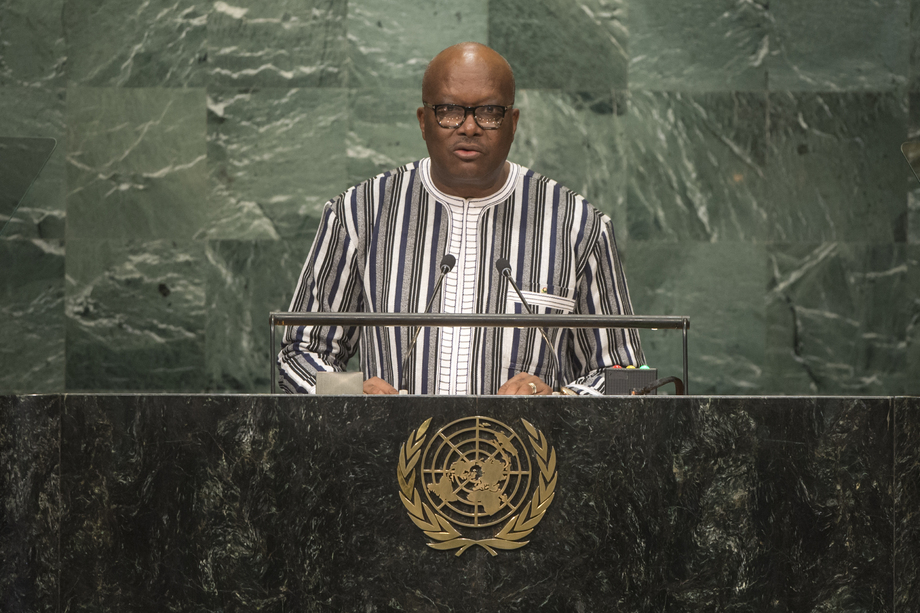 ROCH MARC CHRISTIAN KABORÉ, President of Burkina Faso, said that achieving real sustainable development required the international community to eradicate poverty and fight inequality.  His country had developed a national plan to integrate the goals of the 2030 Agenda and the African Union’s Agenda 2063.  In Burkina Faso’s endeavour to efficiently implement those goals, his Government knew that it could count on the active solidarity of all.

Terrorist attacks and unprecedented violence had manifested as a worldwide scourge, he said, and continued by acknowledging the memories of all victims of terrorism.  “Our fight will only bear fruit if we destroy the rear-guard and manage to cut the supply source of terrorism,” he continued.  That should be done parallel to managing the root causes of terrorism: injustice, exclusivism and poverty.

Peace, security and development were monumental challenges for the world and Africa in particular, he said.  His Government welcomed the progress made in the region, although hotbeds and flashpoints remained.  The security situation in northern Mali continued to cause great concern, requiring a strengthened mandate for United Nations Multidimensional Integrated Stabilization Mission in Mali (MINUSMA) and the implementation of the rapid intervention force of the Group of Five Sahel, known as the G-5 Sahel.  South Sudan and Somalia were other countries that had to “close the chapter on violence”.  Furthermore, his country reiterated its appeal for a political solution to the conflict in Western Sahara.

The world would not become peaceful as long as the Middle East was not peaceful, and not until Israel and Palestine lived side by side in perfect harmony, he said.  He called on the international community to seek true peace in Syria, Iraq and Yemen so that those countries could contribute to the well-being of their citizens and their region.  He also reiterated his support for the African call for reforming the Security Council, in order to repair a historical injustice.