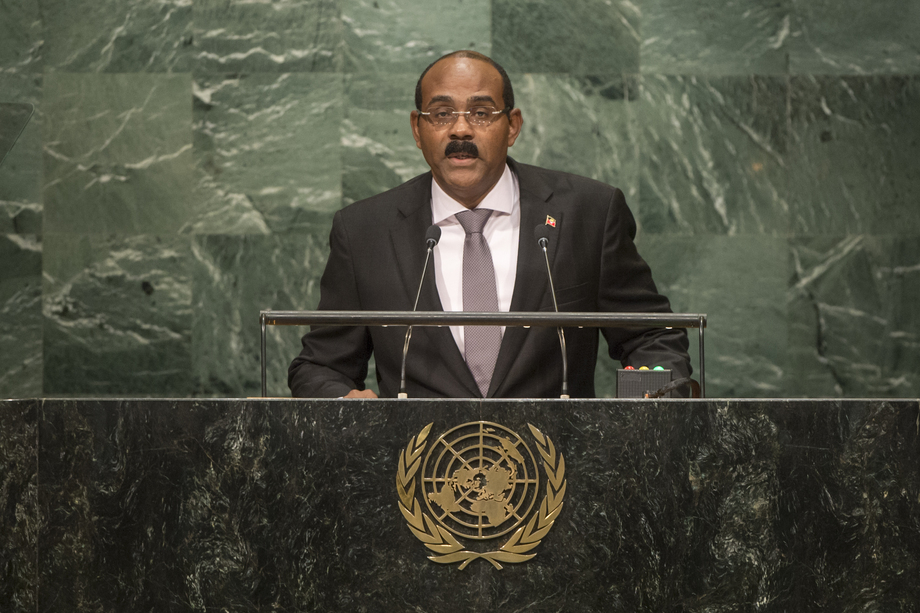 GASTON ALPHONSO BROWNE, Prime Minister and Minister for Finance and Corporate Governance of Antigua and Barbuda, expressed support for the 2030 Agenda for Sustainable Development and disappointment that many of its goals remained aspirational, lacking legally binding funding commitments.  “We are realistic enough not to reject the good for the perfect,” he said, adding that his Government would continue to advocate for fairness and equity in pursuing the fulfilment of the Sustainable Development Goals.  Earlier this week, Antigua and Barbuda had deposited its instrument of ratification of the Paris Agreement on climate change and urged other nations to do the same.  “Time is not on our side,” he said, warning that, even at a temperature rise of 1.5°C, many countries — or parts of them — would be washed away.  The ravages of climate change would also generate many refugees and displaced persons.

He said that, as a solution to those challenges, his country had repeatedly proposed debt swaps for climate change adaptation and mitigation.  That plan included the provision of soft loans to stop further debt accumulation, while helping to build resilience to global warming and sea-level rise.  International financial institutions and donor Governments must stop using per capita income as the criterion by which nations qualified for loans, he emphasized, while noting that such pleas had long fallen on deaf ears.  Year after year, Heads of Government of small States had called on the Assembly to address those challenges to no avail.  “We remain trapped in the reality of a narrow tax base, high debt, large trade deficits, small underdeveloped domestic financial markets, small private sectors and fragile banking systems,” he said, adding that the latest challenge facing the Caribbean region was the withdrawal by global banks of correspondent banking regulations for its financial institutions — known as “de-risking”.

As a result of that practice, he continued, the region would be cut off from the world trading system, which would lead to economic collapse, as well as rising poverty, crime, refugee numbers and human trafficking.  Huge opportunities for money-laundering and terrorism financing would be created.  Warning that no country would be immune from those consequences, he said that the Caribbean Community (CARICOM) had decided to convene a high-level conference on the matter, to be held in Antigua on 27 and 28 October.  In that regard, he called upon the Assembly to recognize the substantial and dangerous threat posed by de-risking and work to address it constructively.  Pointing out that developing countries and small States remained marginalized from the world’s bounty, he said the current global order paid only lip service to the universal principles and ideals of the United Nations.  Indeed, it was time to recognize that “injustice anywhere is a threat to justice everywhere”, he stressed.