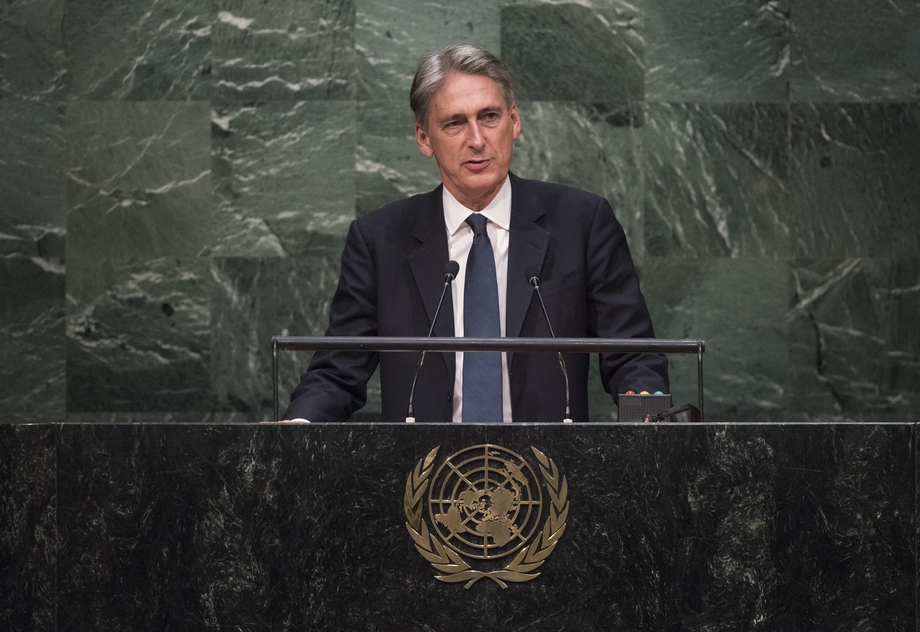 PHILIP HAMMOND, Secretary of State for Foreign Affairs and Commonwealth Affairs of the United Kingdom, said that 70 years ago leaders of the countries that founded the United Nations gathered in London to institutionalize the conditions for peace.  From the ashes of war, the quest for peace and human dignity had begun.  His country was proud to be a founding member.  Today, it was proud that the United Kingdom was the only industrialized nation that met development assistance targets set by the North Atlantic Treaty Organization (NATO) and the United Nations alike.  The world today faced numerous challenges, old and new, and immediate and long-term, including humanitarian crises, denials of fundamental freedom and violations of territory integrity.  In addition to those challenges, longer-term threats had emerged, such as climate change.  The international community must avoid putting the future generation at risk.

The world must tackle immediate challenges as well, he said.  Most imminent was the Syrian crisis.  Syrian President Bashar al-Assad and ISIL were inflicting suffering on its people on an unimaginable scale.  There was an urgent need to end that conflict.  He commended Turkey, Lebanon and Jordan for their generosity to accept those fleeing conflict.  The United Nations appeal for the Syrian humanitarian crisis must be met.  His country would remain in the forces to counter ISIL.  But defeating the group alone would not bring an end to the crisis.  An inclusive political settlement was needed, and perpetrators of crimes must be held to account.  But progress on that front had been blocked for too long in the Security Council.

Each country must follow its path to prosperity, he said, underscoring the need for security as a prerequisite for development.  Security within a country must be also matched by security between nations.  Stability could be best achieved by following the rule-based international system with the Charter at its heart.  All States should respect territory integrity and political independence.  His country stood shoulder to shoulder with Ukraine.  Aggression must have consequences.  Crucial to the success of the United Nations was to embrace change and remain relevant.  The Council must be reformed, and a transparent process was needed to select the next Secretary-General.  “He or she has to head a more efficient Organization” in which every penny was used to maximum effect, he said, stressing that his country would champion that reform agenda.  The world was a better place because of the United Nations.  That legacy must be preserved.

The representative of the United Kingdom said it had no doubt about the Chagos Archipelago, which had been British since 1814, and was administered as part of the Indian Ocean territory.  No tribunal had ever called the United Kingdom’s sovereignty of the territory into doubt.  The United Kingdom did not recognize the representative of Mauritius’ claim to the Chagos Archipelago.  The United Kingdom planned to approve accession of the archipelago to Mauritius once it was no longer needed for defence purposes.  In the meantime, those defence purposes contributed significantly to global security, including protection against terrorism and piracy.