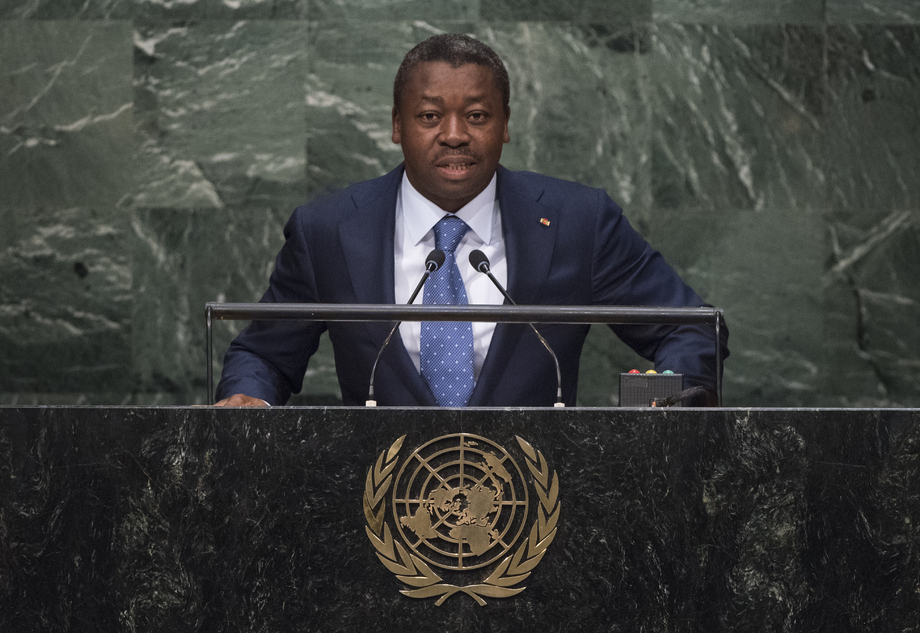 FAURE ESSOZIMNA GNASSINGBÉ, President of Togo, said his country, since becoming a member in 1960, had done its utmost to contribute to the Organization’s noble ideals and, in turn, had received much from the “great United Nations family”, with support, including from the United Nations Office for West Africa and the United Nations System in Lomé.  Following successful elections in April, Togo expected to prioritize social and economic inclusion to strengthen its citizens’ well-being and enable their participation in the development agenda.  With regard to the fight against Ebola, he expressed gratitude to all parties that had mobilized significant resources, saluted the heroism of healthcare personnel and expressed condolences for lost lives.  While the virus had been weakened, but not completely conquered, he urged the world community to remain vigilant.

Despite the great economic growth in Africa in recent years, actions and financing that went beyond classic financial structures were needed.  Following the Addis Ababa Conference, he hoped the donor community would spare no effort to assist African countries more constructively and with fewer restrictions.  It was regrettable if cultural values, which formed the bedrock of African societies, were sacrificed in the search for more appropriate mechanisms for financing development.  Pressure should no longer be brought to bear on their States to adopt initiatives that would lead to cultural shocks, he urged, underscoring that certain Goals, such as those connected to sexual and reproductive health, not be conditions for the granting of resources.

His country’s fight against Boko Haram, terrorism and racism must continue along with the international community, he said.  Today’s realities also included the impact of climate change, poverty and threats to human rights.  The Togolese already experienced every day the effects of climate change, including coastal erosion that was threatening coastal populations.  Their survival required more urgent responses and significant investments.  In that regard, climate change financing was critical and should not come by way of a reduction in traditional official development assistance.  Togo, with the support of the African Union, would host a special summit in 2016 on maritime security, given the economic security and environmental challenges connected with seas and oceans.  Noting the recent closure of the Office of the High Commissioner for Human Rights in Togo, he said the eight years of cooperation had enabled his country to make significant progress in defending human rights and expected to continue unswervingly efforts in the same regard.