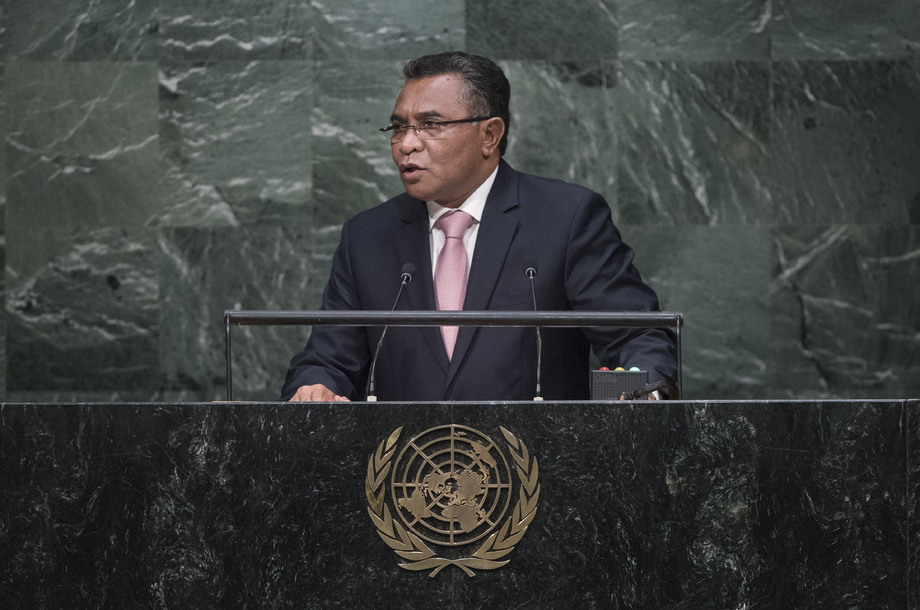 RUI MARIA DE ARAÚJO, Prime Minister of Timor-Leste, said the world had changed dramatically since the Charter was signed seven decades ago.  The world must reaffirm its commitment to the pillars of the Organization, while recognizing that they had yet to respond to the aspirations of all peoples in all nations of the world.  To that end, the United Nations needed a reform that would allow it to respond to the challenges emerging today.  Reforming the Security Council had been pointed out as one of the requirements to make the body more representative and balanced.  “Improving the system is the only way for us to be prepared for the long journey ahead towards fulfilling and honouring the promise of peace, security and human rights for all,” he said.

Having launched the new 2030 development agenda, the dynamic of change must now focus on the other pillars of the Organization, which are peace and security and human rights.  Conflicts and violence continued to ravage the world, with millions forced to abandon their homes.  Thousands of people were arriving in Europe every day, seeking to escape conflict zones in Syria, Iraq, Afghanistan and other countries.  Those refugees must be provided with the protection they were entitled to under international law.  It must also not be forgotten that crises, wherever they cropped up, could drag on and spread indiscriminately, affecting the economy, social life, peace and stability of other regions of the world.

Indeed, conflicts and crises still persisted in Africa, the Middle East, Asia, Europe and the Americas, he said.  The Sahrawi, Palestinian and many other peoples continued to be denied their fundamental human rights.  New and different threats to peace, security and human rights now existed in the forms of terrorism, organized crime and extreme violence.  In addition, climate change threatened the international community, which was approaching a moment of decision on that issue in Paris later this year.  The discussions that took place there must produce universal, ambitious and legally binding results.

Officially announcing his country’s desire to join the Association of South‑East Asian Nations (ASEAN), to boost progress in fragile States through the G7+ Group, and to adopt the international mechanisms for the promotion of peace, democracy, justice and human rights, he went on to say that Timor-Leste had achieved democratic inclusion in a peaceful and dignified manner.  However, the road ahead for the country was long and arduous; in addition to further building its institutions and promoting sustainable development, it would work towards the full assertion of its national sovereignty, including the demarcation of its maritime borders with its two neighbouring nations, Indonesia and Australia.  That would be accomplished through dialogue or international conflict resolution mechanisms.