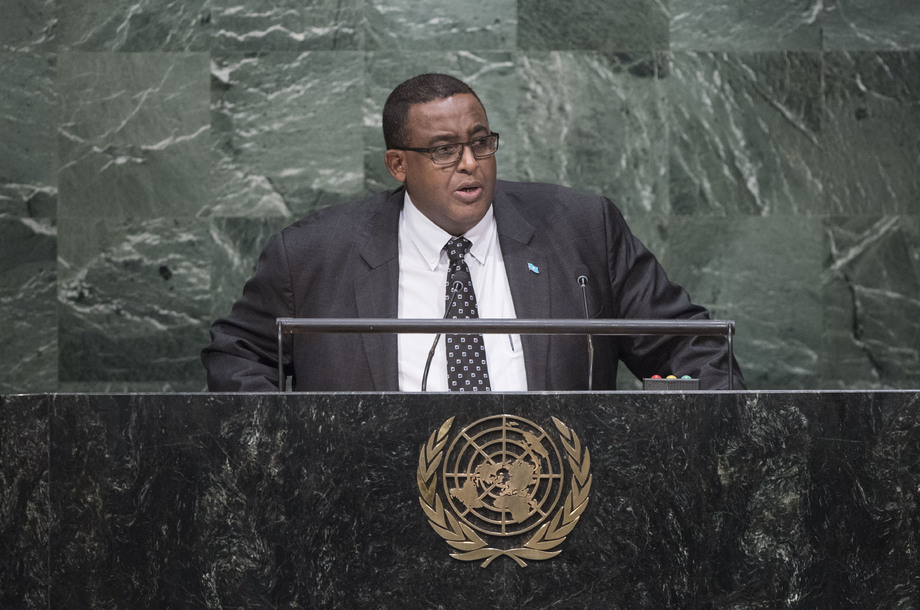 OMAR A. A. SHARMARKE, Prime Minister of Somalia, said that his country 25 years ago had experienced its own “Arab Spring”, and had seen — through two challenging decades — the repercussions when a State did not meet the political demands of a society.  However, with perseverance and togetherness, a new Somalia had taken shape, and the State intended to continue its “climb from the dark”.

Somalia was home to a proud and prosperous people.  Even without a Government, businesses had functioned; banks had been built on social capital and trust; invaluable networks had attracted a range of investors; and the shore-line had remained full of potential, with untapped oil and gas reserves.  The new Government was actively rebuilding the country to realise its potential: it had defeated piracy; embraced decentralisation; and mandated a free, democratic election and constitutionally decreed commissions to ensure accountability.  But some issues persisted and required the help of the international community.

To begin with, there remained an active insurgency, and although the Government — together with African Union forces — had liberated all major regions from Al-Shabaab, Somalia’s soldiers were underpaid, underfed and underequipped.  Somali refugees and migrants still lived in temporary camps, and required United Nations support in finding durable solutions.  Finally, the rebuilding of State institutions and infrastructure needed enabling.  Public services that many around the world took for granted, Somalia either lacked or held in short supply.

To the General Assembly, he proposed a “Grand Development Plan” for Somalia.  Aligned with the new Sustainable Development Goals, the plan would focus on the establishment of an essential social and physical infrastructure in the country.  It would help create jobs and opportunity for young Somalis, providing choices to keep them from extremism.  Finally, it would eliminate the “local business” of non-governmental organizations and give each Member State the opportunity to invest in the economic rejuvenation of Somalia.  Only four years ago, radical insurgents controlled the country.  But today, children had returned to Mogadishu beaches; women sat on dunes selling baked goods; and the “sound of bullets had been replaced by the noise of construction.”