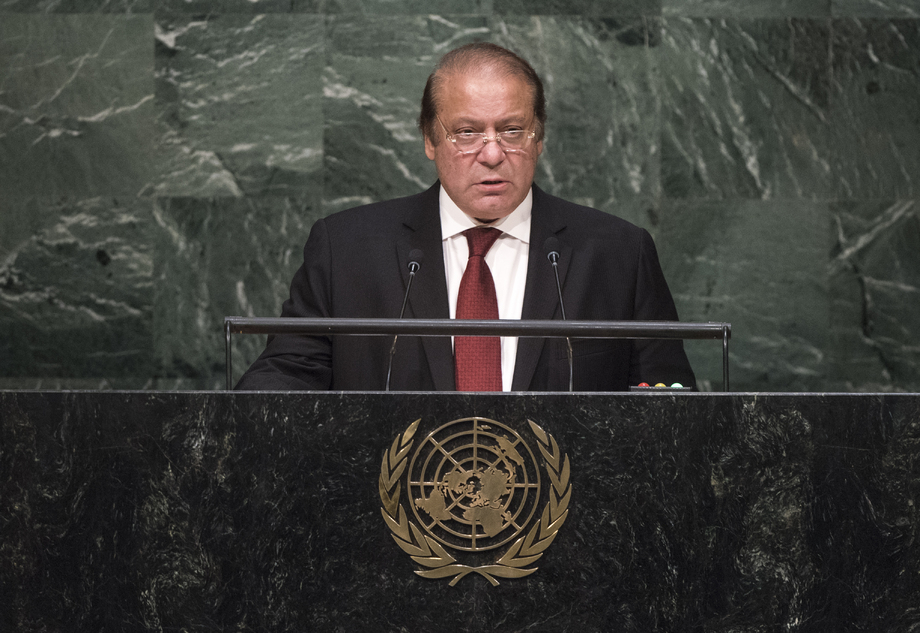 MUHAMMAD NAWAZ SHARIF, Prime Minister of Pakistan, said peacekeeping had been one of the key responsibilities of the United Nations and Pakistan was proud of its historic and current role as a major troop contributor.  It viewed its participation as its obligation to uphold international peace and security.  Pakistan was a primary victim of terrorism and its operation, Zarb-e-Azb, was the largest anti-terrorism campaign against terrorists anywhere.  It involved more than 180,000 security forces and was complemented by an all-inclusive National Action Plan.  Terrorism could not be defeated unless its underlying causes, including poverty and ignorance, were addressed.  The spread of terrorism across the Middle East was an unprecedented security challenge.  The tragedy of Palestine had intensified and the accepted avenue for peace between Palestine and Israel, a two-State solution, appeared further away today because of the intransigent stance of the occupying Power.  Yet the Palestinian flag was being raised just outside this hall and Pakistan hoped it was just the first step.  He looked forward to welcoming Palestine as a full member of the United Nations.

Pakistan welcomed the comprehensive nuclear agreement reached between Iran and the P5+1 (China, France, Russian Federation, United Kingdom, United States and Germany), he said.  Pakistan-Afghan relations had undergone a positive transformation after the advent of the National Unity Government in Kabul.  Pakistan would continue to help resume the stalled dialogue process but could do so only if it received the required cooperation from the Afghan Government.  Pakistan was encouraged that the international community, including the major powers, desired the continuation of the peace process in Afghanistan.  It welcomed China’s proactive role in promoting peace and prosperity in Afghanistan and the region and its vision of “One Belt, One Road.”

Development was the Pakistan Government’s key priority, he said.  When the Composite Dialogue was launched with India in 1997, the two countries agreed it would encompass two principal issues:  Kashmir and peace and security.  The urgency of addressing these two issues was even more compelling today.  Since 1947, the Kashmir dispute had remained resolved and Security Council resolutions were not implemented.  “Three generations of Kashmiris have only seen broken promises and brutal oppression.  Over 100,000 have died in their struggle for self-determination,” he said.  “This is the most persistent failure of the United Nations.”

He said that President Sharif had said one of his first priorities after assuming office for the third time in June 2013 was to normalize relations with India.  He had reached out to the Indian leadership to emphasize that their common enemy was poverty and underdevelopment.  Yet ceasefire violations along the Line of Control and the Working Boundary were intensifying.  He wanted to use this day to propose a new peace initiative with India.  Its first element was that Pakistan and India would formalize and respect the 2003 understanding for a complete ceasefire on the Line of Control in Kashmir.  Secondly, Pakistan and India would reaffirm they would not use, or threaten to use, force under any circumstances.  Thirdly, steps would be taken to demilitarize Kashmir.  Lastly, Pakistan and India would agree to an unconditional mutual withdrawal from Siachen Glacier, the world’s highest battleground.

Speaking in exercise of the right of reply, the representative of Pakistan responded to India’s attempts to deny its “illegal occupation” of the Jammu and Kashmir region.  India had deployed over 700,000 security forces there, he said, emphasizing that some 100,000 Kashmiris had been killed, many women raped and children orphaned as a result of the occupation.  Independent human rights organizations had confirmed the existence of over 6,000 mass graves in the region.  India should withdraw its troops and let the Kashmiris decide their own fate in line with relevant Security Council resolutions.  The issue could not be cast aside by empty rhetoric; it would always be on top of the list of any discussions between India and Pakistan.  It was therefore disingenuous for India to ignore the issue; while proclaiming its willingness to talk, it had imposed preconditions it knew would never be acceptable to Pakistan.  Using the “terrorism bogey” it had prolonged the conflict.  The entire world was united in univocally condemning terrorism except for India, which felt that acts of terrorism in Pakistan were acceptable.  He cast serious doubts on India’s willingness to prosecute individuals accused of terrorism against Muslims, and said that there existed dossiers of evidence of Indian support for terrorism in his country.  Pakistan remained willing to move forward in a peaceful and constructive manner; he hoped that India would respond positively in the interest of peace and prosperity.