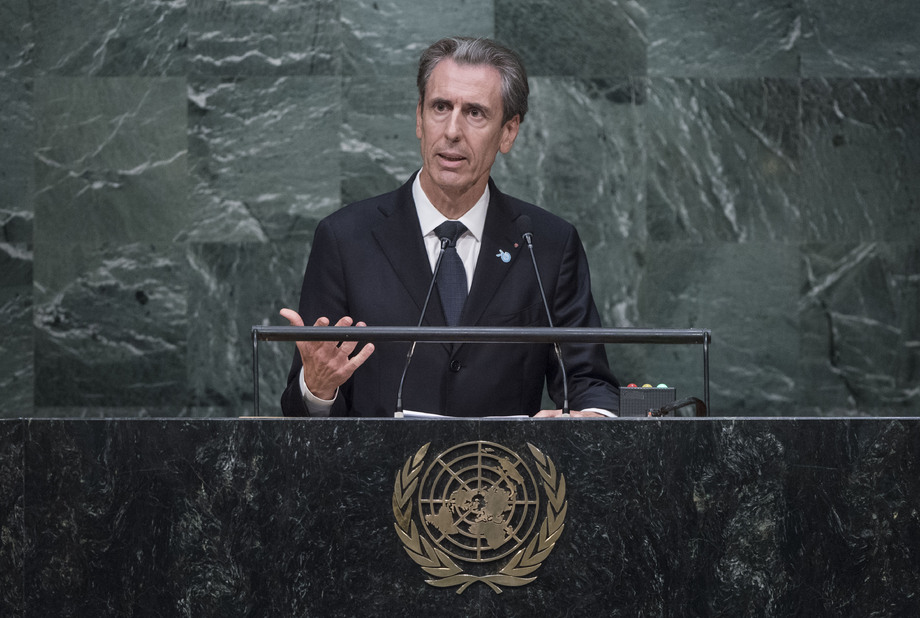 GILLES TONELLI, Minister for External Affairs and Cooperation of Monaco, said the dramatic situation which continued to unfold in Syria, and the “barbaric” means used by extremist groups, were horrifying.  The international community could not remain indifferent to that suffering or to the destruction of common human heritage in places such as the temples of Palmyra.  His Principality strongly supported the Secretary-General’s initiative “Human Rights for All” and his endeavour to establish an action plan on preventing violent extremism.  Monaco had also co-sponsored Security Council resolution 2178 (2014) on foreign terrorist fighters and violent extremism.  In addition, the Principality supported a peaceful solution to the Ukraine crisis.

The primary responsibility bestowed by the Charter to the Council to maintain international peace and security led him to commend France’s “courageous” initiative to call for suspending the right of veto by its five permanent members when dealing with situations of mass atrocities.  He officially announced Monaco’s support to that initiative, as well as to the Accountability, Coherence and Transparency Group’s proposal to develop a “code of conduct” which would apply to all Member States.  In one month’s time, the world would commemorate the fifteenth anniversary of the adoption of Council resolution 1325 (2000) on Women, Peace and Security.  It would be an opportunity to unveil the results of the implementation of the global study on that issue.

Unfortunately, he continued, the world was far too familiar with the devastating effects of conflicts on women.  Along with children, they represented the majority of refugees and displaced persons worldwide.  Convinced of the importance of women’s active and full participation on an equal footing to conflict prevention and the peaceful resolution of conflicts, as well as to peacebuilding and peacekeeping, he called for the implementation of concrete measures on that issue.  He turned next to the issues to be tackled by the first Humanitarian Summit proposed by the Secretary-General, which were of utmost importance as they took into account the emerging crises of climate change, natural disasters and health crises.  The international community must refine a new humanitarian deployment framework to meet those growing and complex needs, ensure its predictable financing and have a long-term development planning strategy in place to fully complete its objective.

The Addis Ababa Action Agenda was adopted to enable the implementation of the 2030 Agenda.  The launch of the Technology Facilitation Mechanism during that summit had translated the spirit of collaboration between all development actors working for developing countries, and bore witness to the will of the international community to concretely strengthen their capacity.  However, those efforts would not be successful without a universal, legally-binding agreement to combat climate change and to push the world towards resilient, low-carbon societies and economies.  To that end, Prince Albert II of Monaco had committed the Principality to halve its carbon footprint by 2030 compared to 1990 levels, and had renewed his commitment to make the Principality carbon neutral by 2050.  Monaco also supported the International Oceanographic Commission’s “2015 Ocean and Climate Platform”, as it was the personal commitment of Prince Albert II to take action for healthy and productive oceans and seas.