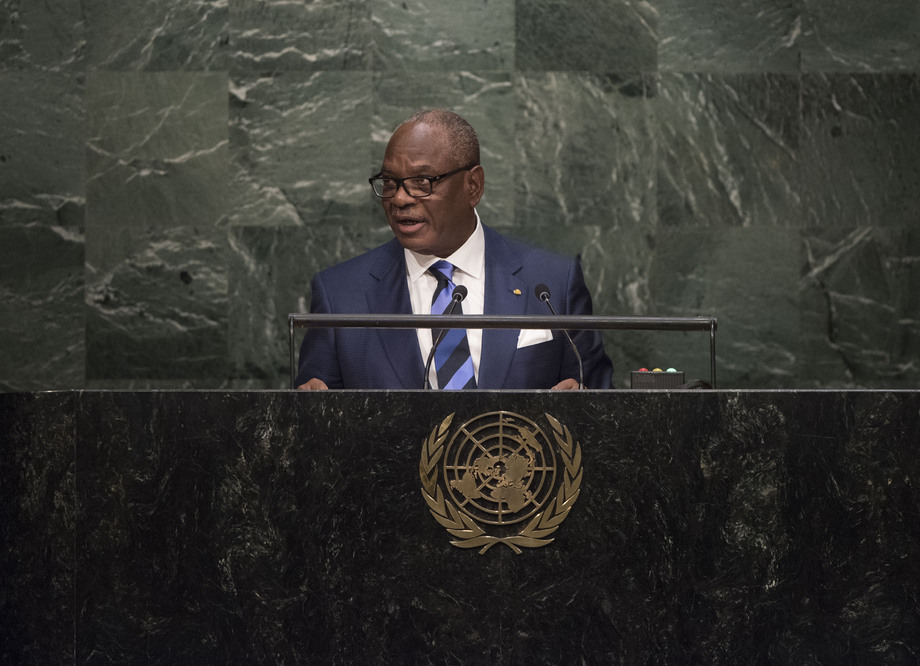 IBRAHIM BOUBACAR KEITA, President of Mali, said that today marked the fifty-fifth anniversary of his country becoming a Member of the United Nations.  Since that day in 1960, nations had spared no sacrifice to rid the world of wars.  Mali had always given preference to dialogue rather than taking up arms, including with the multidimensional crisis it was besieged by recently.  After eight months of discussion with its friends and brothers in the North, he said, Mali was pleased to see that the Agreement for Peace and Reconciliation in Mali had been signed.  Its signing had sealed a reunification of all the sons and daughters of Mali in order to implement the Agreement.  It was a compromise, but it was a balanced one that respected unity and territorial integrity.

No country had been assisted and helped as much in recent years as Mali, he said, which was thanks to the help of the international community.  A follow-up committee had been created for Mali’s Peace and Reconciliation Agreement, which was taking measures to build confidence for citizens so they could have unflagging faith in their country.  The people of Mali had expectations that the international community would continue to be by their sides for that process.  There was a conference planned to be held in Paris in October for the implementation of the Mali Agreement, and God willing that conference would be held and many friends from the United Nations would come to that event.  The emergency plan for the interim period was welcome, although the signing of the Agreement was not an end in and of itself.  It needed to be carried out, and he appealed to Member States to attend the conference in Paris and help with that implementation.  Terrorist groups, which were narco-jihadists, were only trying to quench their thirst for power with fear.

He expressed gratitude on behalf of his Government to the international mediation efforts led by Algeria, the Economic Community of West African States (ECOWAS), the European Union, the Organisation of the Islamic Cooperation and others.  There were now 193 United Nations Member States taking part in a cooperative effort that was founded on peace, security and human rights.  It was an honour to celebrate the seventieth anniversary with those countries.  That celebration would show the world how far the Organization had come and what could be done when the global community pooled efforts to respond to common challenges.

The United Nations was called upon to face new challenges, and the focus was on a sustainable development programme, he said.  Africa’s Agenda 2063 aimed to achieve development, including saving and preserving the environment.  There was a need for good economic governance and financing for development.  Furthermore, he expressed gratitude to those who met in 2013 in Brussels to re-boost economic recovery in Mali by presenting €3.5 billion of assistance while also calling on those who had made pledges to honour those commitments.

Among the world’s biggest challenges was international migration, which was due to many factors including the cynicism of man and those involved in organized crime, he said.  Thousands of people who were involved in illegal migration were losing their lives in the oceans or deserts or in makeshift vessels.  It was necessary to find appropriate solutions to improve conditions for migrants.  On security, it had become important to strengthen tools and mechanisms to face the rising threats of violent terrorism.  It was urgent to make up the gap between security challenges and the United Nations doctrine in regard to peacekeeping.  Reform to that architecture was needed.  Finally, he commended the courage of President Barack Obama and President Raul Castro, as well as the Pope for the role that he played, for mending relations between Cuba and the United States.