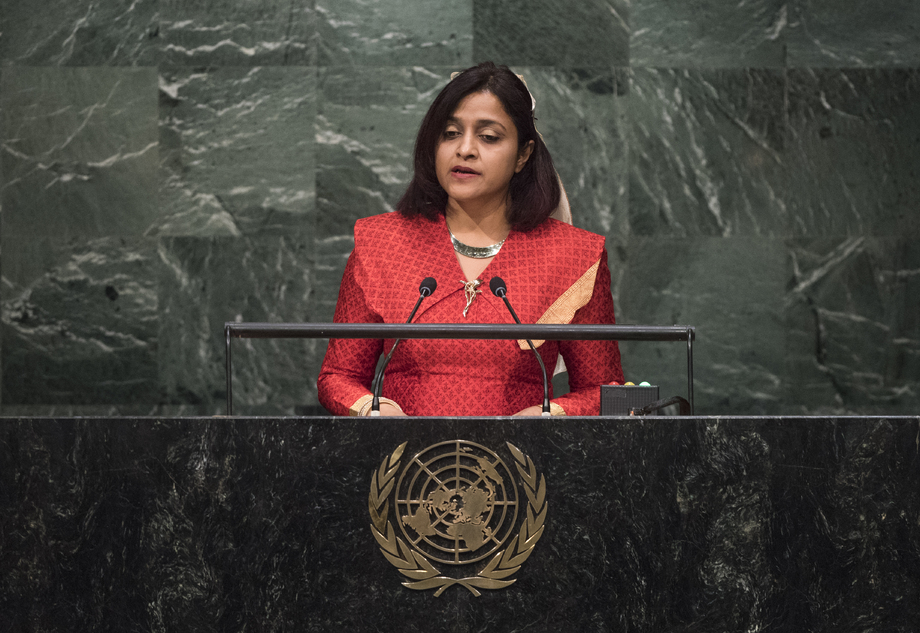 DUNYA MAUMOON, Minister for Foreign Affairs of Maldives, said the Charter’s first words, “We the Peoples”, had made it clear that human life was at the heart of the United Nations.  Seventy years later, she questioned whether that goal had been well served.  Generations had been saved from of inter-State war, yet inter-State conflict persisted.  Faith in human rights had been enshrined in principle, yet equal rights within nations large and small had been ignored.  More children were in school, yet the gap between the rich and poor had widened amid ignorance and intolerance.  “If we want it to inspire courage in face of adversity, to protect the rights of nations regardless of size, the United Nations must be reformed,” she stressed, questioning why key issues must be confined to specific bodies, as solutions did not fit neatly into separate compartments.  She urged redefining security to include climate change, a security threat which had damaged her country’s economy, depriving it of its right to land and way of life.  Maldives had reduced emissions and was working towards a legally binding climate agreement.  “If we the smallest can act, why can’t the biggest?”, she asked, underlining that maritime piracy and other criminal acts persisted.

When the United Nations was founded, swarms of refugees had crossed borders and seas, seeking to save their lives.  Yet, fear had not overtaken humanity.  Today, people again had been seeking safety from war, she said, adding that “I urge you, show compassion”, and to call the situation what it was — a refugee crisis.  People were fleeing violence carried out in the name of Islam.  Condemning such acts, carried out by groups that fed Islamophobia, she said the international community must not let those groups redefine peace, tolerance and compassion.  She urged that Palestine become a full United Nations member and for the establishment of the State of Palestine within the 1967 borders.  The international architecture, including the United Nations, was not designed to accommodate the unique features of small islands and that must change.  Small States were ready to be part of solutions, especially through partnerships.  “Alone we might be weak, but together, we can move mountains,” she said.