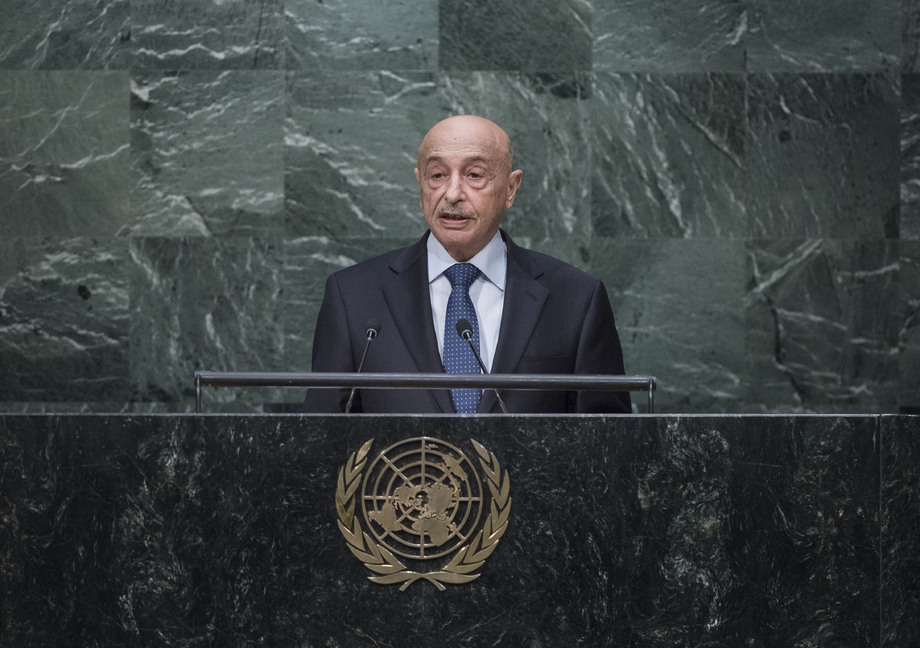 AGILA SALEH ESSA GWAIDER, Acting Head of State of Libya, said the goal of the Charter to save future generations from the scourge of war remained elusive.  His country — a “fledgling democracy seeking to find its way” and to transform itself into a transparent, democratic country with effective and stable institutions — was threatened by the spread of weapons and armed groups, some of which turned intro criminals and terrorists.  Over the past year, Libya had witnessed the emergence of Da’esh, which asserted control over several Libyan towns.  That entity aimed at stretching its influence from Mauritania to Bangladesh and making the whole region subject to the “rule of the jungle”, while claiming it as the “rule of Islam”.  That ideology was totally rejected and resisted by the Libyan people.

Those groups were an essential part of the militia alliance of Fajr Libya, which had seized the capital, Tripoli, and repeatedly announced that it would continue to support Ansar al-Sharia while describing them as “revolutionaries”.  “All these terrorist and extremist groups are nothing but tools to implement the policies of foreign countries,” he said, adding that those countries provided them with arms and ammunition.  The Libyan authorities’ efforts to fight terrorism were hampered by external support for terror, in addition to the continuation of the arms embargo and the Security Council’s insistence to not approve requests for an exemption from the arms embargo in order to arm the Libyan army.

The majority of the Libyan people were looking for any possible means to end the unjustified fighting and to restore stability to the country, he said.  Nonetheless, they had fallen hostage to armed groups.  Hundreds of thousands of Libyans had become internally displaced persons or refugees, but hoped to return to their homes as soon as possible.  That could only be fulfilled by agreeing on a strong Government enjoying the confidence of all Libyans.  The House of Representatives, as the legitimate authority elected by all Libyans, had been supportive of dialogue as a strategic option to resolve the political and security crisis in Libya.  However, there was intransigence in positions and misinterpretations of the flexibility shown by the House of Representatives.  That had even been misunderstood by Bernardino León, the Special Representative of the Secretary-General, who “tried to bring us back to square one”.

Against that backdrop, he stressed several points.  First, the Council of Representatives was committed to dialogue as an approach to resolving the security and institutional crisis in Libya, but it would not agree to any regression with regard to what had been approved by the majority so far.  Second, no agreement should be imposed on any future Government to take any steps in favour of terrorist organizations. And third, the House of Representatives hoped to receive a final draft of an agreement that did not reward those who had committed crimes, destroyed State property and seized the capital by force of arms.  Turning finally to the migrant crisis in the Mediterranean, he supported all international efforts to reduce the risks to illegal migrants, provided they fell within the framework of respect for the principles of sovereignty and non-interference in the internal affairs of other States.  Using force against smuggling boats off Libya’s coastline could increase the complexity of the country’s crisis, and would not help reduce smuggling of migrants.