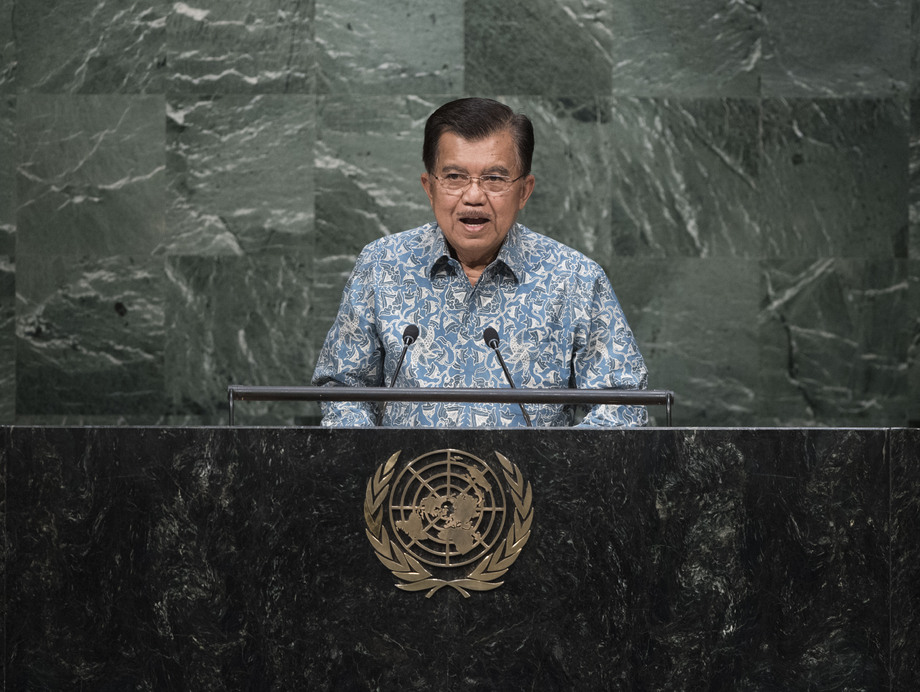 MUHAMMAD JUSUF KALLA, Vice-President of Indonesia, said a success story of the United Nations was its peacekeeping operations, which had kept conflicts at bay around the world.  Indonesia was the largest contributor of troops to the Department of Peacekeeping Operations, and stood ready to contribute even more troops if necessary.  At present, however, there were still many conflicts raging around the world: the Palestinian people still had no State, and sectarian conflicts such as the one in Syria were unfolding.  His country had experience in resolving conflict by peaceful means, he said, noting that August had marked the tenth anniversary of the signing of the Helsinki Memorandum of Understanding on Aceh, which had ended some 30 years of armed conflict.  He noted with concern that there was little progress made in the United Nations Disarmament Commission; the world lacked the necessary political will for nuclear disarmament.  The international community was also witnessing the worst year in recent history in terms of human migration and refugees.  Economic disparity and inequality continued, with more than 800 million people around the world suffering from undernourishment.  In many parts of the world, women, children, the elderly, persons with disabilities and other minorities remained marginalized.

On trade, he said there had been no concrete resolve from the Doha Trade Round to support a fair multilateral trading system.  Meanwhile, the Ebola crisis had shown the need for more robust health systems worldwide, and youth unemployment was high around the world.  “We must work together for rising peace and prosperity for our people,” he said, and it must stop the spread of radicalism and extremism.  The Organization also had to be reformed to become more inclusive and transparent.  He hoped that the Climate Conference in Paris would result in an agreement to limit global temperature rise to below 2°C.  In narrowing global disparities, South-South cooperation was a critical tool.  To that end, his country would establish the “Asian Africa Centre” as part of the follow up to the 2015 Asian African Summit.  Finally, he said, to guarantee peace and equitable prosperity, the United Nations needed support from each and every Member.

Exercising the right of reply, Indonesia’s representative responded to statements that had been made by delegates from Tonga and the Solomon Islands, rejecting references to the “so-called human rights issue in West Papua” as “dangerously misleading”.  No country, big or small, developed or least developed, was free from human rights problems, she said.  Indonesia was no exception.  However, as a mature nation and the fourth largest democracy in the world, her country had a robust national human rights protection system and continued to strengthen its related institutions and legislation.  The Government also worked with civil society and human rights institutions, which provided the necessary checks and independent reviews to ensure that human rights were properly monitored and protected.  She said the references that had been made contained inaccurate allegations and indicated political motivation beyond human rights concerns.  The provinces of Papua and West Papua enjoyed wide-ranging autonomy, guaranteed by national laws, including in the election of governors and other heads of regional Governments.  The Government was committed to continuing engagement, in good faith, with Pacific island countries, with which some of its people had strong commonalities, for peace and prosperity in the region.